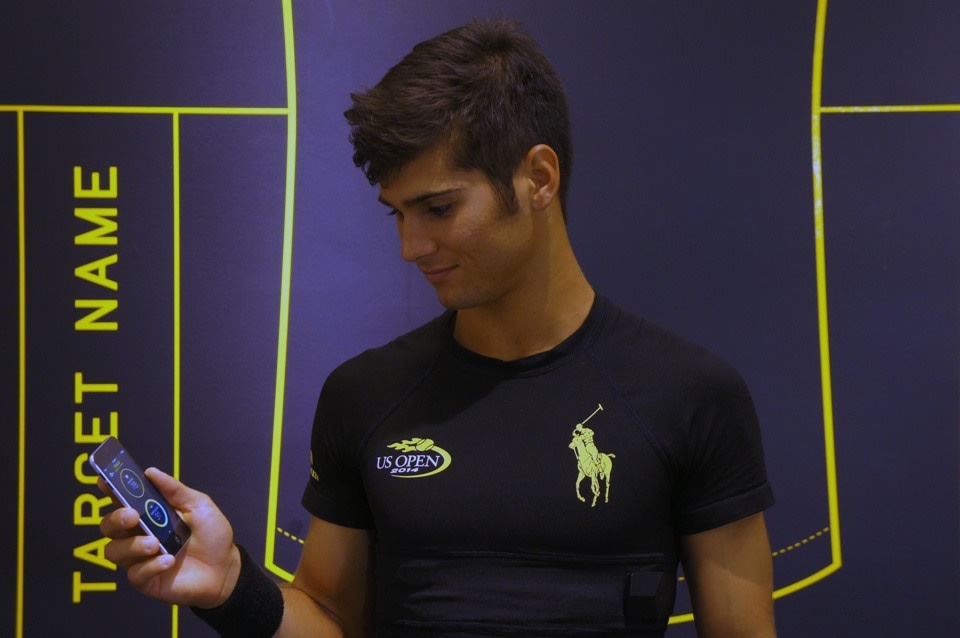 I wish I could say I went "hands-on" with Ralph Lauren's new tech-infused smart shirt, but that would have meant putting my hands all over Marcos Giron, the collegiate tennis player who's making his US Open debut this week. I'm sure he would not have appreciated that. Even so, I still got to see the shirt (and Giron) in person at a press event here in New York, where the tennis tournament is already underway. Read on to see how it works.

The Polo Tech shirt, which was made with the help of Canadian tech firm Omsignal, has built-in sensors that track the wearer's heart rate and movement. That data then gets sent to an iOS app, thanks to a Bluetooth-enabled box that detaches from the shirt when it's time to do laundry. (The company is also mulling an Android app.) It's in the prototype stage for now, though some US Open ball boys will wear it this week, as will Giron, during practices. (Ralph Lauren is a US Open sponsor.) Basically, it's designed to take the place of a standalone fitness tracker or heart rate monitor -- gear that could potentially get in the way while you're trying to move. It's also worth noting that while other companies have tried smart sportswear, it's still rare to see a well-known brand dabbling in such things.

The main potential problem seems to be how tight the shirt seems. And no, that's not just on the muscular Mr. Giron; this kind of tech-infused clothing is apparently easier to make when the garment is form-fitting. In an interview, David Lauren, senior vice president of advertising, marketing and public relations, said it's important that the sensors be close to the body, so that they give a more accurate read-out. As the technology evolves, though, he says the company will consider making other athletic apparel, and even "normal" clothes like suits, ties and dresses. "We wanna look at everything," he said. Of course, for Ralph Lauren to make headway there, it'd first have to find a solution to that accuracy problem. In addition, Mr. Lauren indicated that it's tricky figuring out how to embed sensors into different kinds of fabrics, so there's that challenge too.

With time, the "black box" will probably get smaller as well. At present, it's definitely conspicuous, as you can tell from the above photo, though without having used it, I can't say if it's actually distracting. In any case, a Ralph Lauren spokesperson indicated that the box could one day have a more discreet design. Something the size of a button, perhaps.

The app itself is sleek and well-designed, if a bit simple. From your iOS device, you can see your heart rate, breathing rate, steps taken, calories burned and time in "the zone" -- whether that be warmup, fitness, aerobic, anaerobic or maximum effort. From there, you can also go to a dashboard in the browser, as you can with other workout-tracking services, like Garmin Connect. There will also be an iPad dashboard, which should be especially ideal for coaches. For the regular guy buying this from a department store, though, the iPhone app should be enough -- you probably just want to glance at the app after your workout to see how hard you were going.

For now, this shirt is just a prototype, though Ralph Lauren has firm plans to launch it next year. At that point, there will be both men's and women's styles. No word on pricing, except that it's expected to fall in line with other Polo-brand shirts. Do with that what you will, folks.

Coverage: New York Times
In this article: hands-on, OMsignal, polo, ralph lauren, ralphlauren, shirt, shirts
All products recommended by Engadget are selected by our editorial team, independent of our parent company. Some of our stories include affiliate links. If you buy something through one of these links, we may earn an affiliate commission.