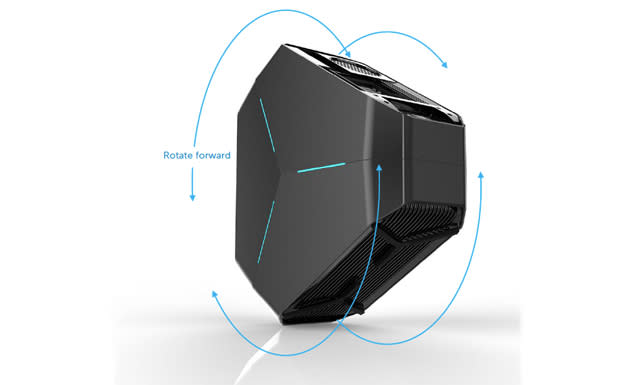 After a few years finding itself/getting a heavy-duty industrial makeover, Alienware's well-respected (and, importantly, customizable) desktop gaming PC has returned. The Area-51 isn't small, but it now has a new triangular... hexagonal... something-between-the-two design, intentionally hewn that way to maintain airflow and keep it cool, even when positioned against a wall. It's certainly come a long way since the tower desktop days of 2011. Given its size, two of the corners have handles to lug it around with -- we hope you can bicep-curl 45 pounds though, because that's how much it weighs. It also looks nothing like Alienware's incoming Steam Machine. (Ironically, the new Area-51 chassis looks far more "Valve," in a lot of ways.) Inside that space-age shell, there's support for up to three full-length graphics cards, Intel's best and brightest Core i7 six- and eight-core Haswell-E CPUs -- all overclockable and liquid-cooled. All the above is backed up with DDR4 RAM support. The early announcement unfortunately didn't cover pricing or release dates, but expect to see the machine later this year. Oh, and the new model also has nine separate light-up zones for customization. Because customization is key to victory in Counter-Strike. (It isn't).
In this article: alienware, area-51, dell, desktop, gamingpc, video
All products recommended by Engadget are selected by our editorial team, independent of our parent company. Some of our stories include affiliate links. If you buy something through one of these links, we may earn an affiliate commission.