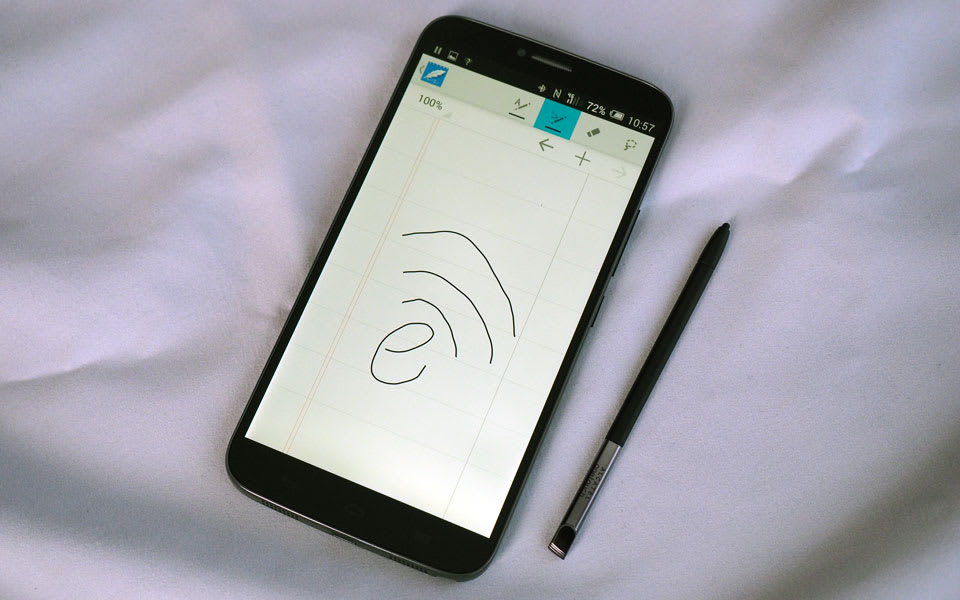 Samsung might have started the phablet frenzy trend of announcing large smartphones at IFA, but it's not the only company to exhibit their jumbo technology at the trade show nowadays. In fact, Alcatel is the latest in a long line of outfits to whip out 6-inch-plus hardware, and this year it's following up the Hero with the unsurprisingly named Hero 2. The 7.9mm-thin device has a curved aluminum body, a reasonably light 175-gram weight and a 6-inch, edge-to-edge display. Sounds rather tempting, non?

We should probably begin with the display, a 6-inch IPS TFT, which has a resolution of 1,920 x 1,080. Naturally, you have to do something with all of that real estate, which is why the Hero 2 comes with a stylus that the company promises will turn the device into a "creative enterprise tool." Hyperbole aside, the Hero 1 impressed by being able to recognize a badly scrawled equation at an odd angle, which it converted seamlessly into digital text and solved in mere seconds. The situation here is reasonably similar, and it was able to pluck out our hurried scrawls of both text and numbers with only a momentary pause.

Performance-wise, there's an octa-core 2GHz MediaTek MT6592 paired with 2GB RAM hiding inside that aluminum chassis, nestled beside a 3,100mAh battery. Storage-wise, there's 16GB tucked inside, and, perhaps a little disappointingly, you can only add in a further 32GB with a microSD card. The aluminum body is also reasonably svelte and solid, and you'd certainly not be laughed at if you pulled this out in a room full of Galaxy Note owners.

The company is in the mood to make some rather bold claims, like saying that the 13.1-megapixel camera with optical image stabilization that sits in the back of the device will produce "DSLR-like pictures." We're not sure any phone camera, even the much-hyped Lumia 1020 could make that sort of claim with a straight face. Having taken at least one picture with the Hero 2, I can say that they're certainly of a higher quality than you may expect from a budget smartphone, but we'd feel more comfortable offering praise if there wasn't the specter of hyperbole hanging over us.

Rounding out the spec list is the usual assortment of 3G/LTE bands, WiFi 802.11a/b/g/n, GPS, AGPS, Bluetooth 4.0 and NFC that you'd expect from such a device that launches in 2014. The company quietly began shipping the device yesterday, and it'll set you back €350, at least in Europe.

On the accessories front, the company is making a big deal about an ecosystem of accessories that it's been working on. In fact, it's one of the most well-rounded groups of accessories that we've seen from a -- ahem -- not premium brand. Those aware of Alcatel's work will already be familiar with the E-Card, an e-ink secondary display that users can push content toward, as well as the HTC Mini+-style Sidekick 2, which pulls double-duty as a Bluetooth headset and as a remote control for the device. The company is also betting big on customizable cases, including "MagicFlip LED," an HTC-style dot-matrix case and, more notably, a MagicFlip DJ controller that turns the whole phone into a set of mixing decks, complete with retro-style controls. 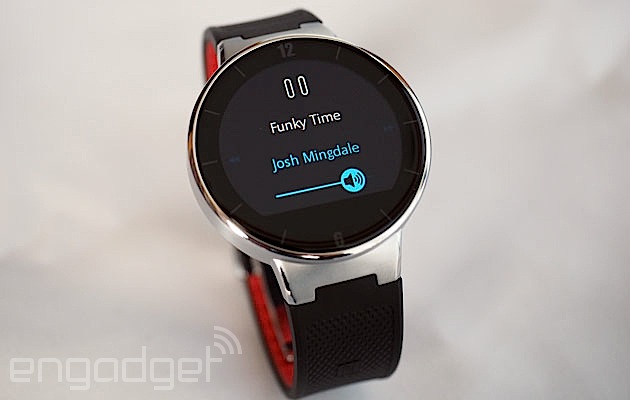 The company is also working on Wave, a wrist-worn wearable with the same round-ish display that you'll find on the Moto 360. With a USB charger based in the strap (akin to Nike's SportWatch+GPS) and an optical heart rate monitor pressed into your skin, the unit offers a choice of watch faces, music control, notifications, camera shutter control and, erm, compass. Unlike many of the other smartwatches that have been launched this week, Alcatel's doesn't run Android Wear, and the company is content that its battery-sipping interface will exceed Google's software efforts, at least initially. There's no word as to when this magical device will head to retail, but the company believes that when it does, it'll be priced up at €99 -- which all seems far too good to be true.

Remember the laptop dock for Motorola's Atrix? Well, Alcatel is bringing it back, after a fashion. The company is still working on the SmartBook, an 11-inch "laptop" with a keyboard, trackpad and display that simply utilizes the power of the Hero 2 for its own ends. It works by pairing wirelessly with the phone over NFC, and then enables you to use a bigger display, mouse and keyboard for work and gaming. Unfortunately, the SmartBook isn't quite ready for prime time, and Alcatel will be hawking it around to various interested parties before deciding whether to bring it to market. If it does, however, then you can expect to pay €179 for it. 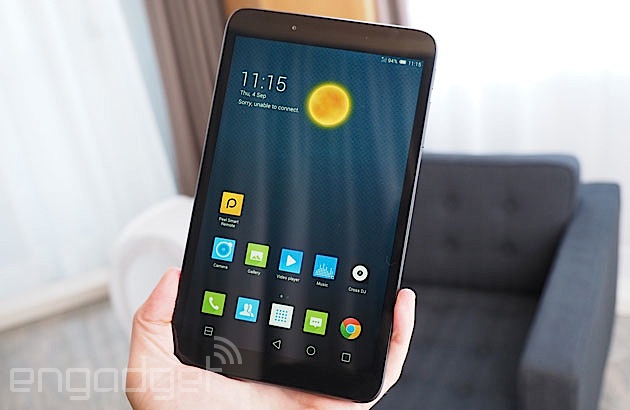 At the same time, the company is also launching the Hero 8, an 8-inch tablet that's spent some time on a no-carb diet, weighing in at 310 grams and measuring 7.3mm thin. Here, you'll be staring into a 1,920 x 1,200 display with some excellent viewing angles and rich colors. Buried beneath that glass frontage is the same MediaTek system that powers the Hero 2, married with 2GB of RAM and 16GB of internal storage that, again, you can add to with a 32GB microSD card. Battery-wise, there's a chunky 4,060mAh cell nestled inside, as well as the option for an LTE modem that'll also enable you to make voice calls from the slate.


The company has made no such bold claims about the Hero 8's imaging, and here there's just a 5-megapixel primary camera 'round back and a 2-megapixel unit up front. Having taken a grainy, slightly washed-out pic from the better of those two shooters, it's safe to say that you'll be discouraged from recording your kids' first steps with this device. There's no word on pricing, but it's expected to land later this month, so it won't be long before we know for certain.
In this article: Alcatel, Alcatel Smartwatch, hands-on, Hero 2, Hero 8, IFA2014, OneTouch Hero 2, OneTouch Hero 8, OneTouch Watch, SmartBand 2, Wave
All products recommended by Engadget are selected by our editorial team, independent of our parent company. Some of our stories include affiliate links. If you buy something through one of these links, we may earn an affiliate commission.