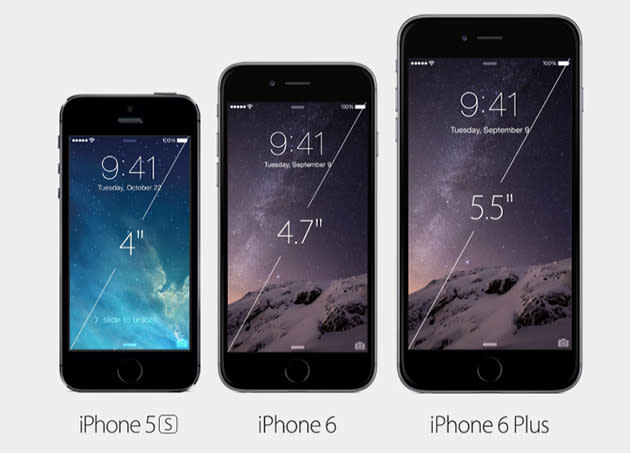 Well folks, the time for wild-eyed rumors and clandestine reports is finally over -- Apple CEO Tim Cook just officially revealed the hefty new iPhone 6 Plus and its 5.5-inch screen in Cupertino alongside a long-rumored (and handier) 4.7-inch model. This thing won't seem all that foreign if you frequent the geekier corners of the web, but it's a sure sign that Apple wants to give all those other pocket-stretching phablets out there a run for their metaphorical money. The company's live press event is still chugging along (with a sketchy stream, no less), but here's what we know so far.

There are no two ways about it: The star of the show here is the spacious 5.5-inch 1080p Retina HD display riding up front -- to hear Apple's Phil Schiller tell it, it's sRGB-accurate, has an ultrathin backlight, photo-aligned IPS liquid crystals, an improved polarizer and ion-strengthened glass. More importantly (and at long last!), the screen runs at 1080p.

You won't notice any dramatic design differences between this model and its little brother -- it's still dramatically thinner than the iPhones that came before it (the Plus comes in at 7.1mm thick), and the angular edges of the 5s have given way to a smoother, rounder look in line with the company's most recent batch of iPads. Remember all those leaks? They absolutely nailed it, and the end result looks, well, really comfortable to latch onto. But what of the tech powering the show? Let's look at Apple's snappy new 64-bit A8 chipset. Schiller says it's 50 percent more energy efficient (not to mention a hair smaller) than the A7 that graced earlier models, and about 25 percent more powerful to boot. A new M8 coprocessor should also help keep better track of your activity levels, since it can hazard guesses at distance traveled and measure elevation changes for you avid stair-climbers. And speaking of power, you'll be able to squeeze 16 days of standby time out of the 6 Plus, 14 hours of continual video playback and or a full 24 hours of 3G talk time out of the non-removable battery. Mobile photographers (which is really everyone these days, right?) may be a little bummed to see that the 6 Plus has an 8-megapixel iSight camera and an f/2.2 aperture lens paired with the same True Tone flash as in the 5s. That's not to say that Apple's been slacking -- it's got phase-detecting autofocus (we've seen similar tech in SLRs), improved face detection and a new Best Shot mode. Extra bonus for Plus owners: you get optical image stabilization, so you can lord your crisper shots over everyone else when it launches. You'll be able to shoot 1080p video at either 30 or 60 frames per second, and slow-motion video has gotten even slower: think a whopping 240 frames-per-second mode. The front-facing camera has been updated with a sensor that's even greedier for photons, perfect for all those well-lit "LOOK I HAVE A NEW IPHONE" selfies you'll probably snap.

Apple's iOS 8 got the grand unveiling treatment back at WWDC, but (to no one's surprise) it packs a few extra features to help it feel more at home on bigger screens. Perhaps the biggest is the inclusion of a two-paned landscape mode, which makes the whole thing feel a little more like a tiny iPad than an upscaled iPhone. If you use the Touch ID button (yeah, you're not escaping those sensors), you'll also invoke a one-handed mode that moves everything down to the lower half of the display for easy access -- great if you've got some short thumbs. There's a decent chance that if you're reading this, you're already clamoring for a 6 Plus of your very own. Curiously, Apple has done away with the 32GB model entirely and added a 128GB model to the mix too in case you've got a few decades of movies that need to go with you everywhere. The 6 Plus will cost $299, $399 and $499 for the 16GB, 64GB and 128GB models, respectively, with your usual two-year contract. You'd better start saving up, too: Preorders start on September 12 and it'll start shipping in "several countries" on the 19th. Take that, oft-repeated rumors of a protracted launch!

In this article: apple, ios, ios8, iphone, iphone6, iphone6plus, iPhoneEvent2014, mobilepostcross, poll, TL16IFON, wedgies
All products recommended by Engadget are selected by our editorial team, independent of our parent company. Some of our stories include affiliate links. If you buy something through one of these links, we may earn an affiliate commission.