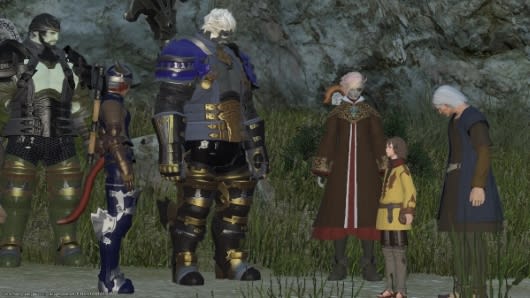 Final Fantasy XIV has been a little pokey in rolling out major new systems. Will this be the case going forward? Not so much, according to a new producer's letter Q&A, in which the team says that future updates should be coming more frequently.

"Due to scheduling issues and circumstances surrounding implementation, we've been prioritizing the implementation of party-based challenges utilizing the duty finder whenever possible," the letter states. "As a result, we were a step behind in implementing systems that make use of the open world, or those that require time but can be completed at one's own pace. With the introduction of zodiac weapons followed shortly after by the Hunt, it may seem as though we're shifting focus toward time-consuming systems, but rest assured this is not the case, and we plan to strike a balance with party-based activities as we move forward."

Other topics of discussion include the upcoming Rogue class and Ninja job, the approximate release window for Patch 2.38 (about a month), word of a new expansion release, and hints about the expansion and new race.
Source: Producer's Q&A
Coverage: Final Fantasy XIV
In this article: class, community-q-and-a, console, consoles, dev-diary, expansion, fantasy, ff, ff14, ffxiv, final-fantasy, final-fantasy-14, final-fantasy-xiv, ninja, preview, producers-letter, q-and-a, rogue, soundtrack, square, square-enix
All products recommended by Engadget are selected by our editorial team, independent of our parent company. Some of our stories include affiliate links. If you buy something through one of these links, we may earn an affiliate commission.