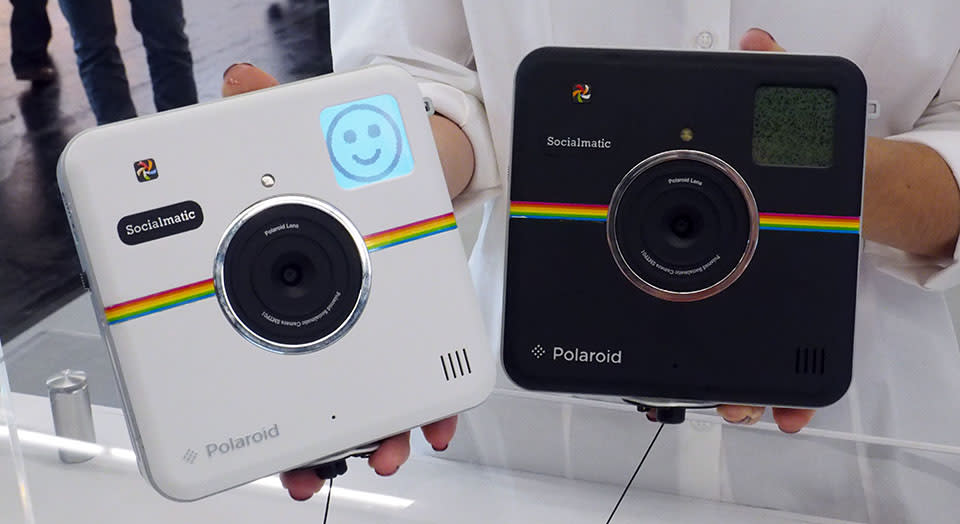 When we first saw Polaroid's Socialmatic camera, the obvious conclusion to make was that the company had simply decided to turn the Instagram logo into a device. Of course, given that the social network's logo was based on Polaroid's device designs, it's a surreal case of pop culture eating itself. Polaroid's jumping on the bandwagon of connected cameras - devices that straddle the line between point-and-shoot snapper and smartphone, but there's one small tweak that'll see this hardware stand out against the Lumix CM1 and Lumia 1020: this one's also got an old-school photo printer tucked inside. The first thing to say is that I'm in disbelief, purely that a product like this got past the legions of designers, managers and sense-checkers who must have been skeptical that this camera would even be made. That's not a criticism, either, because it's great to see companies experimenting with new form-factors and wacky ideas that the industry seemed to have turned its back upon. Pedants amongst you may rile up when I say the Socialmatic is square, but since there's only 0.01-inch of a difference (5.19 x 5.18-inches), I'm just gonna go ahead and say it's square. It's also thick, like a paperback book where someone's hacked off the top third.

Camera-wise, there's a 14-megapixel forward facing lens up front, straddled next to a speaker. In the top right-corner, where the viewfinder would have sat in an analog age, you'll now find a small LCD. The company describes this as a "Frontal LCD with mood assistant AI," but all it really does is show you a smiley face. The face gets happier the more photos of your dinner you take and share with Instagram, and turns all frowny if you've not used it for a while.

Flip it over, however, and you'll see a smartphone awkwardly baked into the center of this bulky plastic frame. The 4.5-inch touchscreen (no word on resolution yet) looks small by comparison, and has a slightly weaker backlight then you'd appreciate on a camera. Nestled above it is a 2-megapixel forward-facing lens, although on the prototype we got to use, it wasn't able to be accessed with the software. In all other respects, then, the Socialmatic is a smartphone without the calling module, relying instead on Bluetooth and WiFi for connectivity and GPS for photo tagging.

The biggest twist on the social camera trend, however, is the fact that the Socialmatic also includes an old-school photo printer inside the body. Lift open the hinge on the side and the whole device opens, enabling you to cram in 10 sheets of 2 x 3-inch ZINK instant photo paper. These little snaps will then shoot out of the side when developed, and while there's no price yet, will retail in packs of 50. If you'd rather not waste paper, however, then images can be saved to the 4GB of internal storage, while a microSD card slot will enable you to boost that further.

Admittedly, it's an early prototype, but it's hard not to be sad that the company hasn't done more with the software. The stock version of Android may be practical for app support, but it breaks the quirky left-field design of the rest of the gear. Of course, there's still a question as to if anyone would actually want to buy a device like this. I assume that it'd be a more expensive version of those Native Union phones you see hipsters toting around in their jeans - a statement purchase for those who deliberately eschew convenience for cool.

Unfortunately, Polaroid was originally targeting a fall launch for the Socialmatic, the current release has been pushed back to early 2015. It's priced at €300, which roughly translates to $388, but that's a small price to pay for a walking, talking Instagram logo, right?

In this article: hands-on, photokina2014, Polaroid, Socialmatic, video
All products recommended by Engadget are selected by our editorial team, independent of our parent company. Some of our stories include affiliate links. If you buy something through one of these links, we may earn an affiliate commission.