MIT creates an AI that understands the laws of physics intuitively 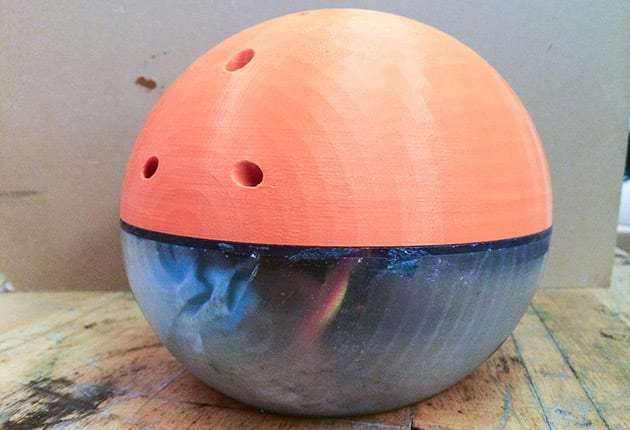 That object above might look like a benign, slightly deformed bowling ball, but it's actually something far more advanced. It's an aquatic robot designed by a couple of MIT researchers, which can surreptitiously inspect the hulls and propeller shafts of ships at port to bust anyone trying to smuggle contraband. The device is perfect for the job, not only because it's small, but also because it doesn't leave visible bubble trails as it moves underwater. Also, its propulsion system's housed within the permeable half of the device itself, so it can potentially hide in clumps of algae to avoid being spotted without getting itself tangled when it starts up. The other half is watertight and houses its circuits, batteries, antenna and other electrical components.

Its creators, graduate student Sampriti Bhattacharyya and Ford Professor of Engineering Harry Asada, recently presented it at the 2014 IEEE/International Conference on Intelligent Robots and Systems. Bhattacharyya says that if he manages to get this device out for around only $600 each, port authorities could get a whole fleet to do collaborative inspection. The duo used a 3D printer to make the device's main components, but in order to offer the device at that price point, their mass production process needs to be low-cost, as well. Right now, though, the two are focused on making a second prototype with wireless charging capabilities, longer battery life and the ability to perform ultrascans on ships without having to touch their barnacle-encrusted hulls.

Source: MIT
In this article: mit, port, research, science
All products recommended by Engadget are selected by our editorial team, independent of our parent company. Some of our stories include affiliate links. If you buy something through one of these links, we may earn an affiliate commission.