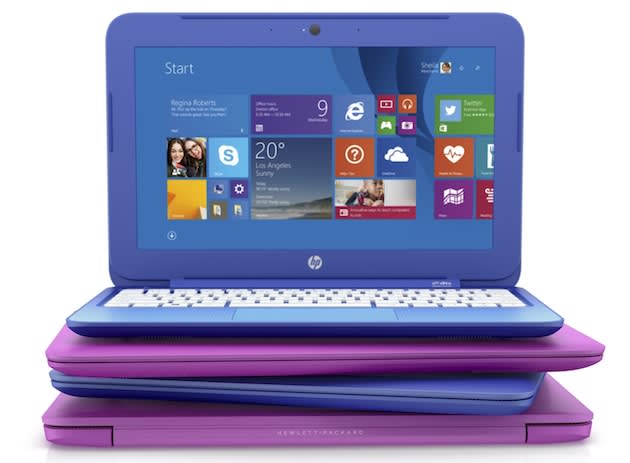 Contrary to earlier rumors, HP's Chromebook-like Stream 14 turned out to be more expensive than people had hoped for when it was announced a few weeks ago. Having said that, today HP is finally introducing its $199 laptop with Windows, staying in line with what a company representative had told us before in regards to the Stream line expanding beyond the 14-inch machine. But there's more, since HP's new, budget-friendly, 11.6-inch laptop isn't the only fresh announcement. There's a 13.3-inch model as well, priced at $230, which, along with the $199 Stream, features an Intel Celeron processor and 32GB of flash storage. In addition to this pair of notebooks, HP is also introducing two Windows 8.1 tablets: the HP Stream 7 and HP Stream 8. If the moniker for each didn't give it away, they are 7- and 8-inch slates, respectively, with the former costing a mere $99 and the latter going for $149. Unfortunately, HP isn't sharing many more details (like other specs) at the moment. We do know, however, that the company hopes to lure in customers by including a bit of free mobile data every month and access to Microsoft's Office 365 Personal productivity suite, which is definitely a nice bonus. All devices announced are expected to be available in the US by the beginning of November. In the meantime, stay tuned -- we'll be adding hands-on photos and additional info shortly.

Update: We are at a media event in NYC and managed to play with the new members of the Stream lineup, save for the 7-inch tablet, which HP wasn't showing off. What's more, HP let us in on a few extra details. The notebooks, for one, are also sporting 2GB of RAM (with the aforementioned Celeron N2840 CPU), Intel HD Graphics and can last up to 8.5 hours on a charge. Meanwhile, the Stream tablets are packing an Intel Atom Z3735G quad-core processor, 32GB of onboard storage (expandable via microSD), 1GB RAM and Bluetooth 4.0. Overall, the list of specs isn't too shabby, especially when you consider the relatively low price points HP has attached to these devices.