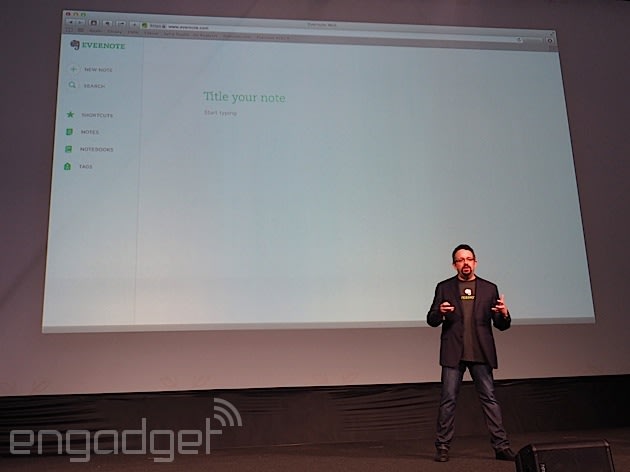 At the fourth annual Evernote conference today, CEO Phil Libin announced a brand-new web client that promises to be simpler and cleaner. As Libin says, the previous web version was rather clunky and overwhelming, and was really a second-class citizen to the desktop versions. The new web client, however, is much more minimalist and better-looking. Indeed, one of the key features is that you can now write notes in a distraction-free interface. The UI, he says, melts away, so that your words take center stage. In a demonstration onstage, the second you start typing notes, the navigation bar disappears, leaving just the text that you're typing.

Formatting choices only appear when you need them, and when you finish your notes, you can just move on. The navigation bar is also much simpler, even though it's functionally the same as it was before. The search field is also treated with the same minimalist, distraction-free interface, so that you can quickly find what you're looking for. "This is the easiest way to get into Evernote," says Libin, adding that it's very appealing to new users. "It's the simplest and most elegant way to take notes." The new Evernote web client should be available starting today, but it's opt-in to start, just in case you're not entirely sure you want to get rid of the old look just yet.

Libin also announced an interesting new feature called Context for its Business and Premium users. It essentially adds a content feed alongside your Evernote interface that surfaces relevant news according to what it's gleaned from your notes. It'll pull the content from sources such as The Wall Street Journal, TechCrunch and Fast Company. Context will also show you related work you or your colleagues may have done in the past. This feature will be available next month.

Other announcements include a prettier presentation mode and a new version of Penultimate, its handwriting app for iOS. Evernote also rolled out a brand-new app called Scannable that essentially lets you scan images directly from the Evernote Edition ScanSnap scanner to your Evernote account.

Source: Evernote
In this article: ec2014, evernote, evernoteconference
All products recommended by Engadget are selected by our editorial team, independent of our parent company. Some of our stories include affiliate links. If you buy something through one of these links, we may earn an affiliate commission.