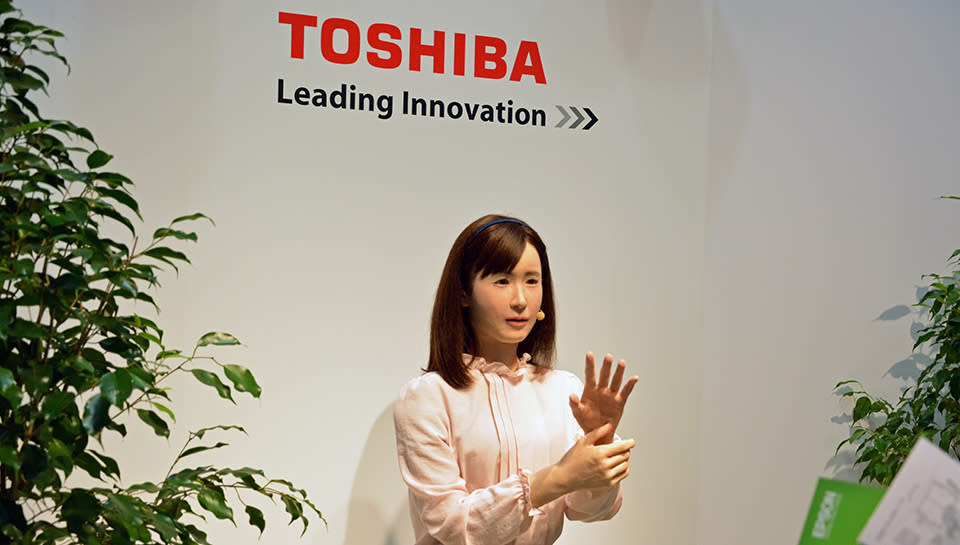 Toshiba's newest hire (of sorts) is called Aiko Chihara -- and she's manning a reception desk at the company's booth at CEATEC 2014 in Japan. Oh, and she's silcone-coated robot. Interaction isn't in her repertoire just yet -- a Toshiba spokesman said that it was certainly a possibility in the future -- as Aiko only came into being last month. There's 15 actuators inside the head for expression, while yet more are paired with air compressor to give (unerringly) smooth motion to the arms and hands. Toshiba collaborated with several universities, including Osaka University, to develop the robot and its sign language skills are geared for Japanese (with voice commands narrating along with it). While the bot is lifelike and fluid, there's no intelligence to speak of: actions are all preprogrammed. The company says that there are also plans to teach Aiko American Sign Language in the future, as well as hoping to install the android and its (sign) language skills at other exhibitions and shows in the near future -- something that a handful of other robots are already being tasked with. We've got video-based glimpse of the uncanny valley right after the break.

In this article: android, deaf, robot, signlanguage, toshiba, video
All products recommended by Engadget are selected by our editorial team, independent of our parent company. Some of our stories include affiliate links. If you buy something through one of these links, we may earn an affiliate commission.