TSA Precheck will let you into some NFL stadiums faster 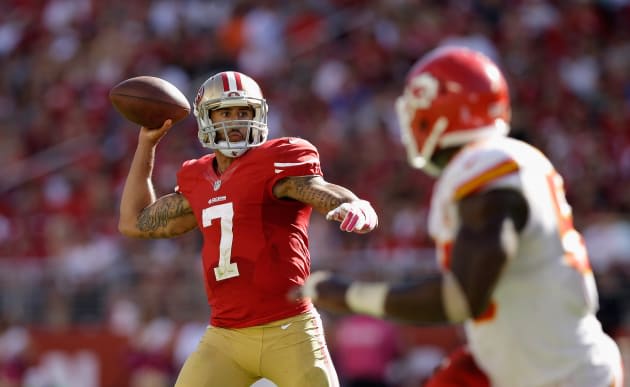 Less than a week after the NFL confirmed that players would no longer be allowed to wear Beats headphones during interviews, the league is already handing out fines for noncompliance. San Francisco 49ers quarterback Colin Kaepernick was fined $10,000 for opting to wear pink pair of Dr. Dre's wares over the NFL-approved Bose cans for his post-game press conference last week. After the Bose deal to become the official headphone and headset of the NFL this spring, the league confirmed last weekend that players couldn't wear another brand during interviews -- including those before, during and up to 90-minutes after a game. As we mentioned before, Beats was also banned on match days and at media events at the World Cup this summer, too. If you'll recall, Kaepernick was one of the main players in Beats' "Hear What You Want" commercials during last year's NFL season. It's also worth mentioning that the NFL makes a big push for players to wear pink gear in support of breast cancer awareness during the month of October every year.

Update 10/10/14: It looks like Bose wants to make sure players have its headphones readily available. Carolina Panthers players were all given a pair this morning.

Every #Panthers player will return from this morning's meetings to find headphones from @Bose in their locker. pic.twitter.com/vHmRSDLhug

Via: Deadspin
Source: CSN Bay Area
In this article: 49ers, beats, bose, colinkaepernick, football, headphones, nfl
All products recommended by Engadget are selected by our editorial team, independent of our parent company. Some of our stories include affiliate links. If you buy something through one of these links, we may earn an affiliate commission.