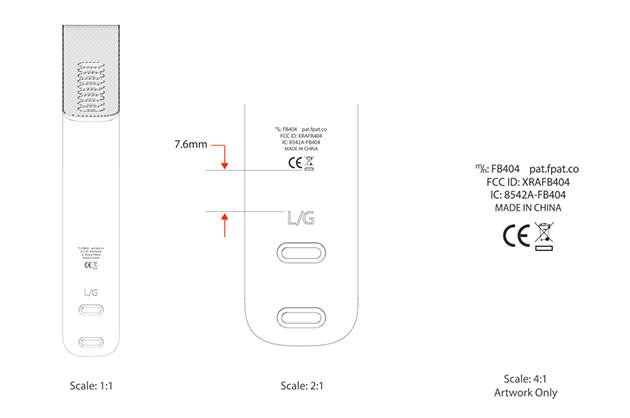 Nearly a year after Fitbit revealed its last fitness gadget, it looks like its next devices will be called Charge. The wearables passed through the FCC revealing the moniker and designation as a "wireless activity tracker." Thanks to a USPTO filing, we can glean that it'll carry the usual waterproofing alongside pedometer and altimeter for tracking steps, sleep and calories burned. On top of those expected features, the paperwork also indicates that a heart rate sensor, navigation info, weather forecast, call notifications and volume control will also be lumped in for syncing up with your phone.

According to in-store pics here in the US tweeted by @etownsendwx, it looks like there will be two models: Charge and ChargeHR. It seems likely that the latter moniker indicates the pulse-tracking chops. Based on those images, the pair looks similar to last year's Force with a built-in display. What's more, both models have already popped up over at Russian retailer IVPstore for 7,500 rubles ($184) and 9,000 ($220) rubles respectively. If you'll recall, the Force was part of a voluntary recall earlier this year due to reports of skin issues, so we'll look for the Charge pair to leverage new materials to avoid the same fate.

Update: Thanks to a helpful tipster, Gizmodo got its hands on some marketing materials for the new Fitbit pair. As we've mentioned before, there are indeed two models and the ChargeHR does in fact offer "continuous heat rate" monitoring via PurePulse. The ChargeHR also appears to have more of a traditional watch-like buckle clasp as well. It's also worth noting that the full Fitbit wearable line is present here, except for the Force. We'd surmise this means the newfangled Charge options will replace last year's offering. And as Gizmodo points out, the weather and navigation features mentioned in the USPTO filing are absent from the features list.

In this article: activitytracker, charge, chargehr, fcc, fitbit, fitbitcharge, fitbitchargehr, fitness, fitnesstracker, uspto, wearable, wearables
All products recommended by Engadget are selected by our editorial team, independent of our parent company. Some of our stories include affiliate links. If you buy something through one of these links, we may earn an affiliate commission.