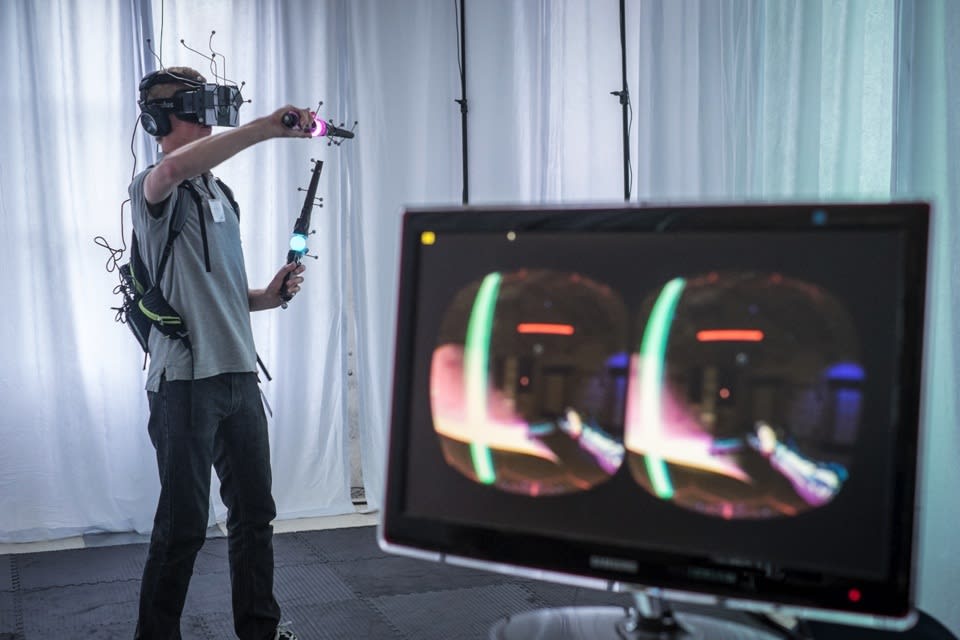 Tech aficionados have been flocking to Seattle's Living Computer Museum for the past few years to get up close and personal with relics from computer technology's past. For one night earlier this month, though, I got a chance to peek at its possible future. Nearly two dozen exhibitors filled the museum's first floor for SEA VR, an invite-only event meant to highlight some of the field's biggest names and showcase the VR community.

Envelop VR played host for the evening, in part, to introduce itself. The new company is looking to both develop its own VR software and help other companies come to grips with what CEO Bob Berry called the next great wave of computing. In gathering some of the VR community's brightest stars to the Pacific Northwest, the hope, he said, is to establish the Seattle area as a VR hub.

Berry moved to Japan in 1998 to study VR as part of his Ph.D. work. After getting a good look at what passed for "state of the art" in the VR world of the late '90s, he quickly realized virtual reality just wasn't ready yet. It was only in the last year or so, he said, that various technologies started combining to make VR feasible -- headlined, of course, by Oculus' work. The next major step, he added, is developing and refining software that takes advantage of those hardware advancements. 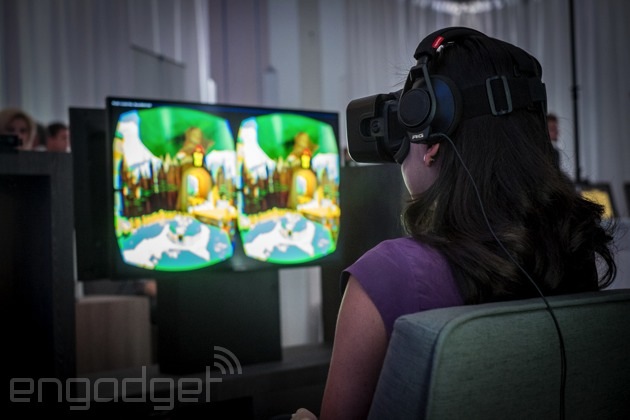 But words can only convey so much. As Berry notes, with virtual reality: Seeing is believing. And there was plenty to at SEA VR. Oculus was there showcasing its Development Kit 2 (DK2) headsets, but its gear wasn't confined to the company's demo area.

Atomic VR's holodeck-style setup featured an older DK1 headset and a camera array to track users in one corner of the museum. A pair of PlayStation Move controllers became virtual lightsabers "energy swords" in a battle with a floating droid. After employees helped me put on the headset, equipment-filled backpack and headphones, I set about exploring the demo's virtual arena.

The lag between my movements and those shown onscreen was noticeable, but hardly a distraction. After a few seconds, I was successfully blocking incoming laser blasts with my swords and dodging slow-moving missiles. The full-body tracking kept up admirably and I never felt disoriented -– a significant plus considering the limited area I could explore.

Still, the relatively low-resolution screens and the buzz of the show floor prevented me from reaching the level of "presence" that VR developers strive to attain. Atomic VR mentioned that it hopes to increase realism when it switches to Oculus' more advanced DK2 kit -- including the use of haptic feedback in the vest and possibly the floor to provide a more immersive simulation.

The game-like applications are obvious, but the company envisions similar setups in showrooms at retailers like Home Depot, where customers can preview home remodels and landscaping projects before breaking out the hammers and shovels.

"VR's going to impact various industries; not just entertainment," Berry said. One look at the show floor was enough to prove that statement. While there were plenty of examples of VR as a gaming tool, there were exhibitors using it in other settings, too. 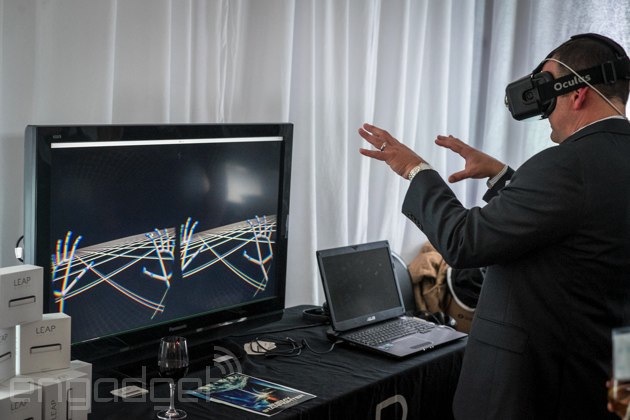 Retailer Nordstrom showcased its Virtual Customer Experience Center, created by the company's Innovation Labs. The software complements a real-world Customer Experience Center housed in a renovated warehouse not far from the Living Computer Museum. The Innovation Lab's virtual version lets designers use tools like Unity and 3ds Max to create and try out new floor layouts, store designs and other physical structures before committing to actually building anything.

Elsewhere on the show floor, DeepStream VR demonstrated its work in pain research and using 3D and VR to aid in patient rehabilitation.

"The virtual world is a motivator," DeepStream VR CEO and founder Howard Rose said. The company has been exploring different methods of incorporating virtual reality into therapy, including combining a treadmill-walking regimen with a projected screen so patients can go on a "walking meditation" through a computer-generated trail.

The company also showed off its DeepStream 3D Viewer, a shroud that attaches to a laptop screen, a Retina display MacBook Pro in this case, to provide panoramic 3D movies and environments. The viewer splits the screen into a pair of 2,600 x 900 images -- one for each eye. Users can adjust the eyepieces as they would for a pair of binoculars and a nearby Leap Motion controller is used to interact with the world. In one example, I used my left hand to gather fireflies to fill a lantern. Rose said using an attachment to a laptop screen (and, later, tablets) can sometimes make more sense than the headset approach Oculus and others are taking. 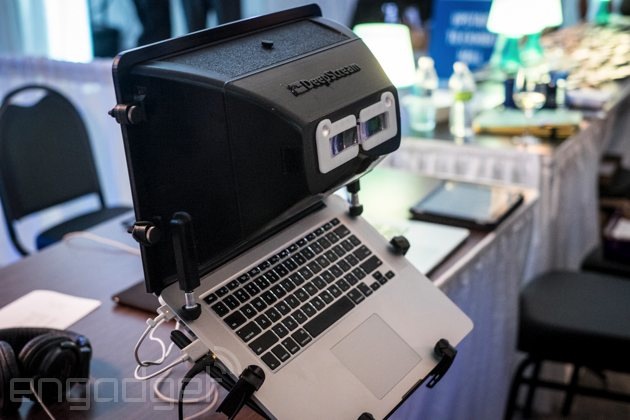 When it comes to patients struggling with constant pain, he said, "Helmets don't work very well." Indeed, placing my face up to the 3D Viewer's eyepieces and manipulating objects with a Leap Motion controller was a great deal easier than strapping on a headset and grasping physical input devices.

A quick scan across the show floor makes it clear there's no single way to approach VR. While Oculus' gear was certainly prevalent at various booths, Kinect sensors, GoPro cameras, PS Moves and Leap Motion Controllers spread throughout the area indicate that developers are still very much in the exploration and experimentation phase.

And while some companies are working to create fantastical environments filled with spaceships and lightsabers, others are figuring out ways to showcase parts of the real world. In one corner of the show floor, Jaunt offered up a multi-scene demo of its real-world VR capture tech. Its approach includes a multi-camera setup to record 3D video in all directions. After putting on the headset and over-ear headphones, I started out with a scene from a skate/bike park, as a bike-riding enthusiast whizzed around me. I could turn my head in practically any direction to keep track of him, while positional audio accurately clued me in to where he was.

"The VR community needs to collaborate ... No company, not even (Oculus) can do it alone."

A later scene of the Golden Gate Bridge demonstrated the powerful effect accurate audio can have in VR. Wind noise was present throughout the area, but I had no trouble pinpointing a ship's horn blaring on the far right. I turned my head completely away from the vessel and, sure enough, the horn sounded like it was coming from behind me. Clearly, high-resolution displays aren't the only requirement for convincing VR presence. 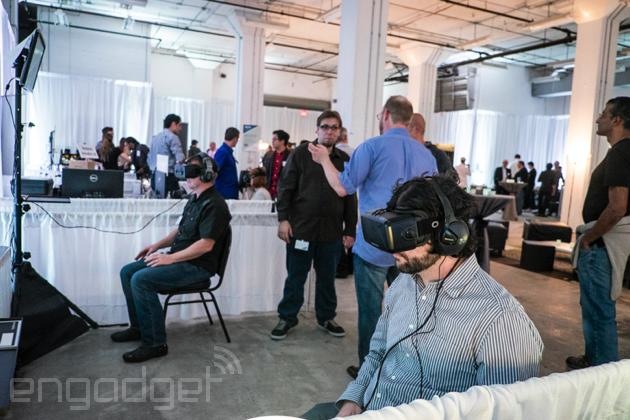 One thing was readily apparent at SEA VR and it didn't require a headset or fancy camera setup. It was a sense of community. From booth to booth, company representatives chatted with one another, happily trying out competitors' gear and sharing notes. I got the sense that many of the attendees are motivated more by the fun of experimentation and discovery than they are by the thrill of ruthless competition.

To Rose, it reminds him of the early stages of the internet, "when it was fun and exciting." Seeing companies explore VR from different angles and coming up with new solutions, he said, is part of what he loves about the virtual reality community right now. After numerous false starts over the past few decades, it's this cooperative, diverse approach, he said, that will be key if VR is truly going to be the next big thing.

"The VR community needs to collaborate," Rose said. "No company, not even (Oculus) can do it alone."

In this article: Envelop VR, oculus, OculusRift, VirtualReality, vr
All products recommended by Engadget are selected by our editorial team, independent of our parent company. Some of our stories include affiliate links. If you buy something through one of these links, we may earn an affiliate commission.