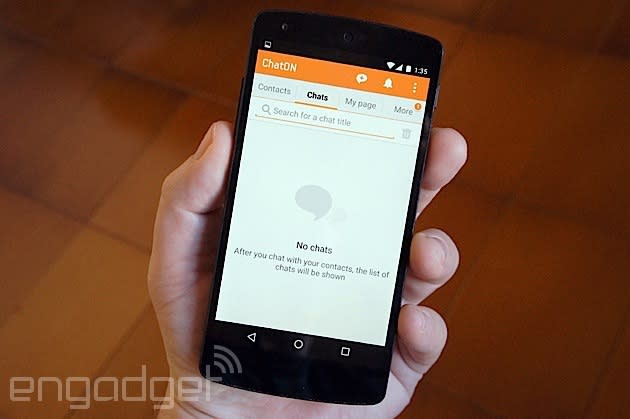 Samsung may have shut down some of its services in recent months, but ChatOn? It's not going anywhere. While The Korea Times claimed that Samsung was going to drop its messaging service on a "region-to-region" basis because it wasn't making cash, the company tells The Verge that those rumors are "false." The service will stick around for people "worldwide," it says. That's good to hear, although it's true that ChatOn isn't the most popular messaging hub around. While you can use it on most modern devices, it had 100 million users at last check -- a fraction of what you see at powerhouses like WeChat (600 million) and WhatsApp (over 500 million). That's healthy, but it's clear that many see ChatOn as a bonus on Samsung devices rather than a must-have social tool.

In this article: chat, chaton, instantmessaging, messaging, mobilepostcross, samsung, smartphone
All products recommended by Engadget are selected by our editorial team, independent of our parent company. Some of our stories include affiliate links. If you buy something through one of these links, we may earn an affiliate commission.