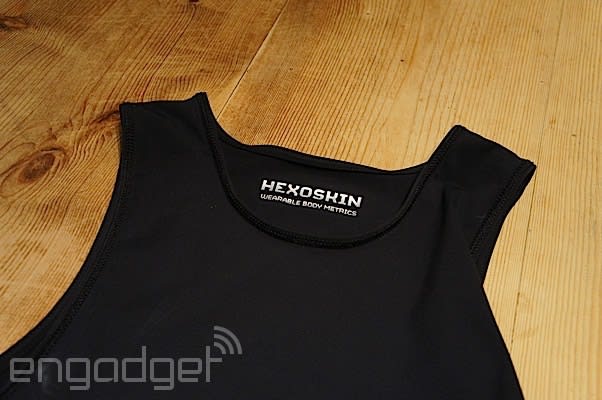 History is littered with stories of companies that share a deep rivalry, yet are based a stone's throw away from each other. For instance, the drive between Apple's and Google's respective headquarters is less than 15 minutes; Adidas and Puma have factories situated on either side of the Aurach; and Samsung and LG are less than an hour away from each other in Seoul. It may surprise you to learn that Quebec is another hotbed of tech rivalry, housing smart-clothing pioneers OMsignal and Hexoskin. Last week, I squeezed myself into the former's shirt, and now it's time to risk my dignity (and my dinner) by wearing the latter for your entertainment.

Both companies are producing sleeveless shirts with contact pads on the inside that touch your skin, while a black Bluetooth unit attaches on the outside. The similarities, however, end there, since the Hexoskin is made from spandex (okay, Carvico's Revolutional, textile nerds) and, in addition to being a compression garment, has two straps that you can tighten around the sensor regions. Where the OMsignal was reasonably thick, the Hexoskin is wafer-thin, to the point where you certainly won't be wearing this outdoors without a T-shirt or sweater on top. 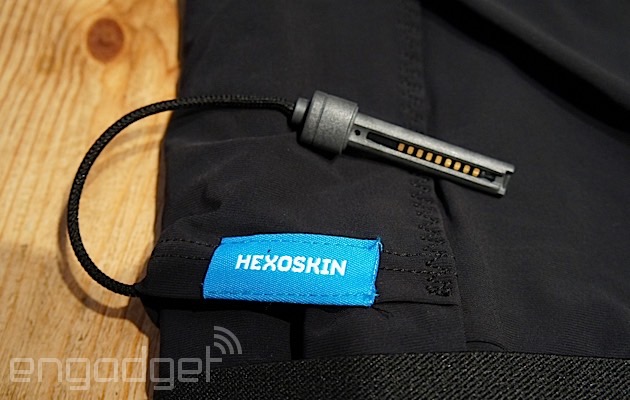 The sensor itself is roughly the size of a Zippo lighter and, rather than using pushpins to connect it to the shirt, there's an odd, stick-shaped proprietary connector that slides through the hardware. You then have to tuck the unit away in a pouch on the right-hand side of the shirt before you can start exercising. There's a similar USB-proprietary cable in the packaging for you to use when charging the unit, too. Aside from the slot up top, there's a single, large button used to activate Bluetooth pairing, along with three LEDs -- one for battery life, one for if the unit is recording your vital statistics and a third showing the status of your connection. As for battery life, the promised time is more than 14 hours of training life and more than 150 hours with "standalone recording," enabling you to wear this to track your sleep. I'll update this more when I've been able to give that feature some more stringent testing. 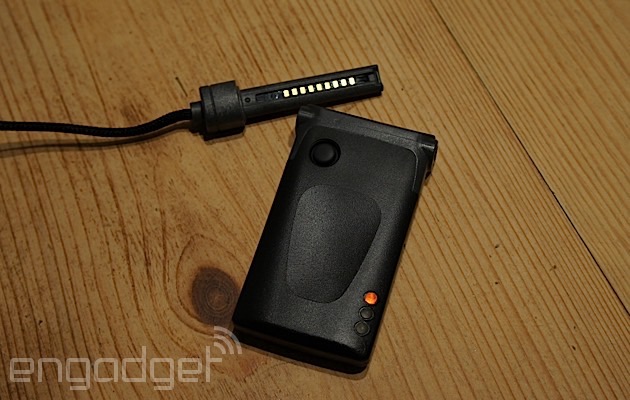 Open the app and you'll be asked what activity you're up to today, with a selection of preset choices available. The list is much longer than I had expected, including not just the usual stuff like running and biking, but also meditation, weight training and even Zombie for those who can't bring themselves to make any more effort. The software monitors your heart rate, breathing volume, breathing rate, activity and sleep, although like the OMsignal app, you'll have to paw across to another page to find your activity and calorie information. It's odd because the app itself has so much negative space, it'd be easy to place all of this data on the same screen. This minor gripe aside, the app is significantly more polished and, for want of a better phrase, better looking than its immediate rival. You can also do a little more with it, since you can use your phone's GPS to map your routes when you're out and about. It transpires, however, that whatever algorithms are being used to run the Hexoskin's calculations aren't particularly good at error-finding. I did some weight lifting (with my feet shoulder-width apart) and all of a sudden, the step count began to rise every time I moved my arms. 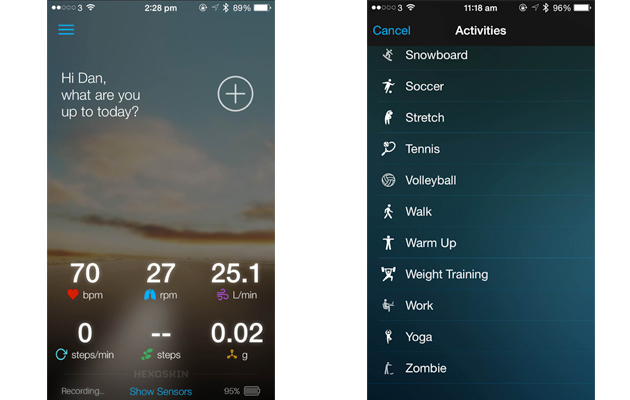 On the downside, the app is a lot slower to refresh than the OMsignal, and I often had to wait several minutes before it worked out that my heart rate had increased while exercising. Then there's the fact that there's no fitness test, meaning it's tough for you to get a base level of fitness that you can then improve upon. In fact, much like OMsignal, there's no coaching or social component to the app either, and while some may feel the latter only appeals to the narcissistic or lonely -- I happen to think that sharing your stats is beneficial, especially if you're working with a professional trainer, and also because the competition may spur you on.

A Hexoskin starter kit is priced at $399 CAD (around $350), but I'm not entirely sure where the extra money goes compared to the $249 OMsignal. I mean, the app is much prettier and well-designed; the shirt itself is more comfortable; and it's made out of fancy fabric, which I assume costs more. Beyond that, however, I don't feel there's much difference between the two options, since neither offers a compelling product that I'd feel comfortable recommending to you all. 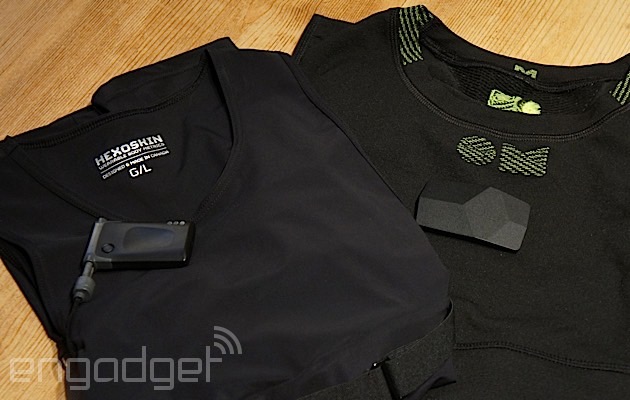 We're currently at the point where smart clothes are so new that companies are throwing stuff against the wall and seeing what sticks. The two products I've tested over the last few days show that there is promise in this particular area and it certainly won't be long before someone cracks this particular code. For now, Hexoskin and OMsignal aren't pieces of consumer technology for the mainstream, and I hope time and experience will help both companies improve their products. I'm sincerely hoping both work on their software, since both have enormous potential that is, as yet, unrealized. Of course, professional athletes and trainers who need all the data they can get their hands on -- and have the money to spend on bleeding-edge technology -- will certainly find something useful here. For everyone else, however, I'd say it's probably best to wait until the second generation.

Source: Hexoskin
In this article: hands-on, Hexoskin
All products recommended by Engadget are selected by our editorial team, independent of our parent company. Some of our stories include affiliate links. If you buy something through one of these links, we may earn an affiliate commission.