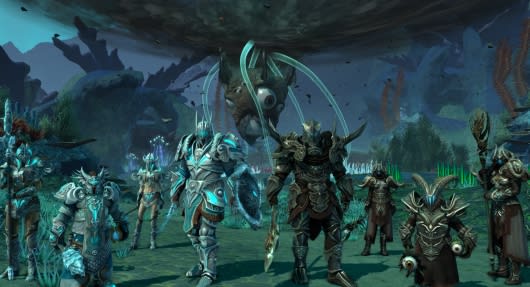 The release of RIFT's latest expansion has led to a minor changing of the guard over at Trion Worlds. It's still the same guard, though, just in different positions. A shuffling of the guard, if you will. The game's new executive producer Bill Fisher announced in a letter to the community that Christopher "Archonix" Junior is getting brought up to the director position following the release of Nightmare Tide.

Junior, by his own words, has been working with RIFT focusing chiefly on the systems end of design. The game's holiday event is scheduled to live next week, followed by the first major patch since the launch of the expansion. The patch, tentatively titled Storm at Sea, will include a new open-world area, extensions to the existing raiding area, and updates to the Minion systems that were introduced with the expansion. Check out the full letter to the community for another few details and a bit more introduction to the game's new director.
Source: Meet Archonix
Coverage: Official Site
In this article: bill-fisher, christopher-junior, director, f2p, fantasy, free-to-play, game-director, industry, mmo-industry, news, news-items, nightmare-tide, patch, patch-preview, patches, pvp, rift, rift-lite, rift-planes-of-telara, rvr, three-faction-pvp, three-way-pvp, trion, trion-worlds
All products recommended by Engadget are selected by our editorial team, independent of our parent company. Some of our stories include affiliate links. If you buy something through one of these links, we may earn an affiliate commission.