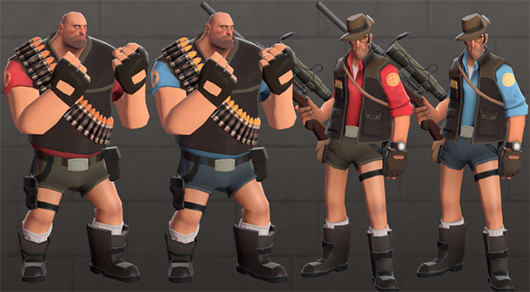 Valve recently held a contest asking players to design the best Tomb Raider-themed customization items for Team Fortress 2 as a sly, interactive way to promote the Steam debut of Lara Croft and the Temple of Osiris.

The publisher then specifically asked players not to dress the portly Heavy in Lara's butt-sculpting khaki shorts. But, because the Internet abhors polite suggestions, creators Void and MultiTrip did just that and won the contest. Their entry, the aptly titled "Jungle Booty," is seen above. Other, less alarmingly sexy winners include Crown of the Old Kingdom which grants the Team Fortress 2 cast a pharaoh-style headdress in an array of colors, and Tomb Readers which features Lara's sunglasses from the original Tomb Raider 3 box art.

The creators of these three submissions will see their submission featured on the Team Fortress 2 in-game store and will receive a massive bundle of over 50 games published by Square Enix.
[Image: Valve]
Source: Team Fortress, 2
In this article: lara-croft-and-the-temple-of-osiris, mac, pc, square-enix, Team-Fortress-2, valve
All products recommended by Engadget are selected by our editorial team, independent of our parent company. Some of our stories include affiliate links. If you buy something through one of these links, we may earn an affiliate commission.