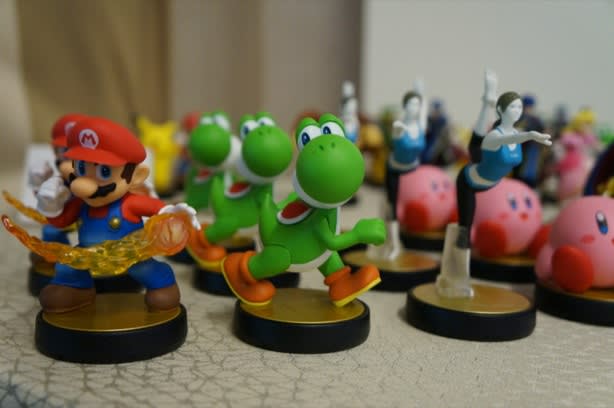 Nintendo's amiibo toys are selling 1 for 1 in the US with Super Smash Bros. Wii U, according to the publisher. In November, the console fighter sold "nearly 710,000" units going by NPD data, and Nintendo of America said amiibo sales are "approximately equal" to those of the game.

This week's seen Nintendo tiptoe around the subject of some amiibo not returning to market, but the company's kept firm on the most popular toys staying available. Nintendo of America reported the best-sellers to date are, in order, Link, Mario and Pikachu. Sorry, Wii Fit Trainer. So far, 12 amiibo figures are currently available in North America. Six more amiibo, including Zelda, Luigi and Captain Falcon, are expected to hit retail on December 14. The following wave of plastic is already scheduled for February 2015.

As for Smash, US sales of the 3DS version are now well into the seven-figure range. According to NPD data, the porta-brawler is at more than 1.5 million units sold since its October launch. That said, the two 3DS Pokemon remakes are already nearly up to 1.5 million sales, and that's after launching on November 21.

Pokemon Omega Ruby and Alpha Sapphire are making money bins of gold for Nintendo to dive into worldwide, according to recent reports. Last we heard, the remade duo had shipped 7.7 million units across the globe.

Source: Nintendo
In this article: 3ds, amiibo, nintendo, north-america, npd, pokemon-alpha-sapphire-omega-ruby, super-smash-bros-2014, super-smash-bros-for-wii-u, US, wii-u
All products recommended by Engadget are selected by our editorial team, independent of our parent company. Some of our stories include affiliate links. If you buy something through one of these links, we may earn an affiliate commission.