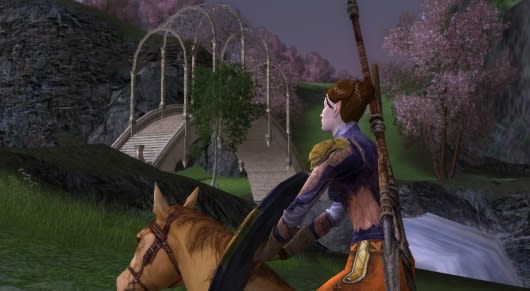 If you read yesterday's Soapbox, the first in my Better models for MMO endgame progression series, with a fair bit of awareness, you probably noticed that the models I presented were, well... safe. Normal. Not too far outside of the realm of what we already have in some games, in other words. Oh, sure, they were functional and expanded compared to what you normally see in games, and they weren't reliant on high-end raiding, but they were still derived from the same space, which is part of the point.

But that's not nearly as far as the rabbit hole goes. So let's start moving further beyond what's already common. Let's start heading into stranger territory.

As before, the models presented here are not super-refined balanced labyrinths of systems; they're the outline, the skeletons, the fundamentals of how these concepts could work. And even at this stage, they're able to go in directions you don't find in numerous MMO endgames. So let's jump right into it, shall we?

Saying that a game is going to have a crafting-focused endgame is one thing. Technically, that's what EVE Online has on the occasions that PvP isn't solely based around hating the other faction's collective faces. It's a model that can work, too, with players shooting stuff for material, selling that material, then buying finished products off of a given marketplace.

In this sort of model, the king of content is the crafting materials and the crafting interface. So let's start off by just eliminating the concept of NPC-made gear. (Not gear vendors; that's different. But we'll get there.) Everything is reliant on the crafting efforts of players, absolutely everything. And this is a more involved process than simply clicking on a button and moving forward on a bar.

Let's start by taking something that has shades of Ryzom without some of the insane fussiness of its material science. Materials are roughly split into tiers based on how potent they are overall; a sword made from tier 1 metals isn't going to be as good as one made from tier 5 metals, at least not when you start out crafting. Different metals also have different properties, though, even within a given tier. The same goes for all the resources that can be gathered and used. There are reasons to use silk in an item's setup and reasons to use wool instead. Both offer different fine touches.

But who's to say that iron blade could never be as good as one made from a high-tier metal? As you become more skilled, using larger amounts of metal, you can make those lower-tier items with their unique properties perform up to snuff with the higher-tier minerals. It's all a matter of crafting skill, adding enhancements to basic recipes here and there, filtering out impurities as you refine materials.

Crafting itself is a bit of a minigame; players juggle various traits that'll show up on the finished product while keeping an eye on overall item durability; think Final Fantasy XIV's minigame, but in an expanded form and with more variables to track. Once you have the finished version, you can bring it over to a vendor... and start selling it to other players.

There are still gear vendors scattered throughout the world, after all. The difference is that they sell items that players have created and customized, letting you personalize the stats and then distribute them through NPC networks. Only so many players can be up on a given vendor at once, so it's a bidding war that hinges on still making a profit. The game also stocks material exchange vendors as in Guild Wars, thus allowing you to quickly ascertain if your mass-produced sword copies are going to make you a profit at $10 a sale while iron goes for $1 per chunk.

Obviously, this model is focused far more on the crafting than it is on the PvE or PvP side of things. But that's part of the beauty of it; you can drag and drop the majority of this into any setup of PvE content and it would still work. My personal preference for this sort of game is to eliminate drops and other gear sources altogether, followed by giving players PvE content that's more focused around achievements and cosmetic pieces or housing items, but there are a lot of options here. The important bit is what you do with the materials once you have them.

Armor power and the nature of new pieces

Here's a thought exercise I enjoy playing around with: What if every piece of armor at a given point was exactly as powerful as any other piece of armor? Sure, defense values can vary a little bit based on whether you're outfitting Ye Olde Physicale Powerhouse or The Very Magiest of Mages, but if you look at two pieces for Sir Powerhouse, they're both offering the same net benefit. Heck, make it a flat power increase that you get to allocate. A new dungeon that drops gear on the same level as a piece you already have is going to offer that gear with the exact same benefit.

One of the thing that harms the very idea of horizontal progression is that sometimes you wind up with something that provides best-in-slot stats. Sure, you can have two otherwise identical rings, but one provides Haste and the other provides Crit, and if your class has almost no use for Haste, well, you'll always want the latter. So let's take all of that out. Those two rings are identical.

Why would you want another ring, then? To actually differentiate it from its equivalents.

Let's put forth a game wherein armors can be given secondary effects that do not map nicely to raw stat increases. So this helm also reduces the amount of area damage you take by 10%, that one gives you a chance at a damage shield when you lose 10% of your health, and that one reduces durability loss. You can put only one such enhancement on any given item.

You unlock new enhancements by breaking down pieces of equipment, with a fair amount of fine control over what sort of enhancement you get divided by region. You can also reliably predict when you'll get your next equipment drop, as it's a matter of time and power. PvE consists of working your way through enemy strongholds, facing off against enemy leaders and the like through scaling arena content, hunting beasts in the open world, and taking on specialized storyline dungeon-style content.

The open-world dungeons can be taken on solo, but groups are advantageous as they allow you to kill that much faster, and since all loot is personal, you aren't worried about someone stealing it from you. You've killed seven enemies in this dungeon; you know that the next one will drop something for you. Meanwhile, scaling arenas allow you to set your difficulty -- the harder it is, the more assured your drop. Difficulty is also separate from group size, and bringing in more people blows up numbers but doesn't inherently make things any harder.

As new areas and challenges come out, you can find new equipment... but you might need to go back to an older area to find exactly the properties you want to put as a secondary element on armor. So this new piece has a higher overall power, but it's the secondary enhancements that you really want. And the secondary enhancements at this tier don't work quite right for your build, so it's better to head back down, farm up some older pieces, and yank bonuses out of that.

Of course, all of these ideas still focus around equipment and forever getting better items out of enemies. So let's break that down, shall we? Tomorrow I'll wrap all this up by looking at a game without equipment and one where equipment is just where you are now instead of a final destination.

Everyone has opinions, and The Soapbox is how we indulge ours. Join the Massively writers as we take turns atop our very own soapbox to deliver unfettered editorials a bit outside our normal purviews (and not necessarily shared across the staff). Think we're spot on -- or out of our minds? Let us know in the comments!
In this article: better-models-for-endgame-progression, craft, crafting, crafts, editorial, endgame, endgame-content, endgame-model, endgame-progression, featured, game-mechanics, op-ed, opinion, progression, progression-model, rant, rants, soapbox, speculation, the-soapbox
All products recommended by Engadget are selected by our editorial team, independent of our parent company. Some of our stories include affiliate links. If you buy something through one of these links, we may earn an affiliate commission.