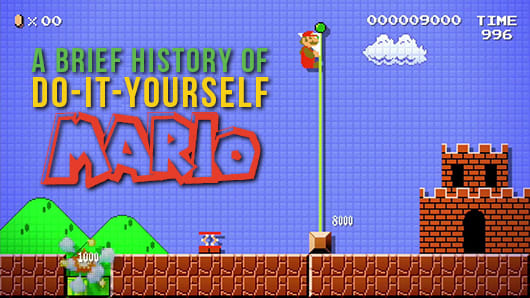 Nintendo's Mario Maker – launching early next year – may be the company's first official foray into do-it-yourself level editing but, as many people know, would-be game designers have been using unofficial channels to do just that for close to two decades using Nintendo's most popular brand. The end result? A fan community like no other, filled with passionate people from all over the globe, all working toward one common goal – creating an absolute boatload of deviously designed Mario levels.

Of course, long before there were dedicated toolsets, there was the humble game ROM. In addition to allowing people to finally brag about beating Ghosts N' Goblins, NES game ROMs had/have the added bonus of being fairly easy to manipulate. What better title to screw around with than the original Super Mario Bros.? It didn't have too many sprites and, oh yeah, there's that whole "pretty much defined video games for an entire generation" thing.

So the ROM-smiths went to work. It was simple stuff at first, like getting rid of Mario's mustache or even his clothes. Naked Italian plumbers soon gave way to stoned Italian plumbers. Most of the notable hacks of this early era were simple one-offs created for shock value, like Super Bud Brothers, which replaced some of the game's bushes and character sprites with weed leaves, and the disgusting Super KKK Brothers in which, well, you can probably guess its horrific gimmick. These hacks all had one thing in common, they were simple sprite replacements, usually just a character or two. It took until around 1998 before somebody used a Mario ROM to create something that resembled a brand new game. That's the good news. The bad news? It's pretty much one giant penis joke. Super Sperm Brothers replaced nearly every character in the entire game. Mario starts out as a floating sperm. Mushrooms are now eggs. Fire flowers are condoms and most enemies are redrawn as some sort of phallus.

It's impossible to keep track of all of these early hacks, as most have been lost amidst the sands of time, but 1999 brought probably the most significant Mario hack to come down the pike. Peach and Daisy: The Ultimate Quest was a full fledged redesign of Super Mario Bros. 3, featuring not only revamped sprite work, but new levels and power-ups as well.

Once it was proven that the original ROMs could be used to create all-new gameplay experiences, the floodgates opened. Pretty soon ROM-sharing sites, like Zophar's Domain, were filled to the brim with fan-made Mario games. These were usually culled from the original Super Mario Brothers and Super Mario Bros. 3, with Super Mario Bros. 2 taking its usual position of neglected stepchild. SMB2 isn't entirely without love, however. There have been some minor hacks throughout the years and a couple of attempts at major redesigns, like the surprisingly fun Legend of the Blob Bros. 2.

One of the most inventive creations from this era, though, has to be Mario Adventure, an absolutely breathtaking sequel to Super Mario Bros. 3., which took sixteen months for its lead programmer to develop. New enemies, new levels, new power-ups, and a swap-item feature that works eerily similar to what has been implemented in the New Super Mario Bros. series. The creator even says he demoed Ice Flower Mario many moons before Super Mario Galaxy, Mario and Luigi: Partners in Time and New Super Mario Bros. Wii, although the item never made it into any of his finished products.


"It actually makes me feel really good to know that I have similar ideas," says Travis Houk AKA DahrkDaiz, creator of the aforementioned Mario Adventure.

When it comes to Super Mario World, things start getting a bit more complex. There are levels that play themselves, for instance. There's also an absolutely enormous fan-made game, Super Demo World: The Adventure Continues, that features over 120 levels (SMW boasts only 96.) I'd be remiss, however, if I didn't mention Kaizo Mario World, a custom game that boasts the hardest Mario levels ever put to digital tape.


You can't discuss the hacks that popped up around Super Mario World without talking about Andrew "Redigit" Spinks. You may know him as the guy who created Terraria, but long before that he cut his teeth creating what is probably the most popular fan-made Mario game, Super Mario Bros. X.
SMBX uses Super Mario World as its template and, just like the best of the NES era, is a completely new game done in the style of the SNES classic.

It's also a comprehensive tool-set that other people can, and do, use to create their own levels. There's even an algorithm that randomizes levels, turning Mario into a pseudo-roguelike. It's a pretty comprehensive piece of software and, thanks to fans, is constantly evolving and changing to this day.
Creators of old games are constantly going back and tweaking, constantly learning from their mistakes and starting anew. In 2011, a designer known as Captain Southbird caused a stir in the custom game community when he unveiled a complete disassembly of Super Mario Bros. 3, painstakingly translating the source code to plain assembly text. Designers, using SMB3 as their template, could now get away with anything they wanted. The end result was something of a modern Mario renaissance, in which designers old and new revisited the NES Mario games with an eye on complete reinvention.

"When I found this [Captain Southbird's disassembly] out, I quickly dived back into ROM hacking after a six year hiatus. For the past two years I've been working on a spiritual successor to Mario Adventure called Koopa Kingdom Escape. This is basically the ROM hack I wanted to create ten years ago," says Houk.

The fun didn't stop with Super Mario World. There are toolsets that will let creators put a personal stamp on Super Mario 64, Super Mario Galaxy and even those ornery New Super Mario Bros. titles. As game development budgets can attest, designing an explorable 3D world is much more time intensive than their 2D counterparts, so don't hold your breath for Mario Maker: 3D Edition.

"2D levels can be made much faster. You don't need to make a model, you can just place the ground, block, enemies and other objects in one go," says Lugmillord, creator of Super Mario 74, one of several unofficial sequels to the N64 classic. "I did it on the fly when I worked with Super Mario World for the most part. Working with Super Mario 64 required I start with a small sheet of paper (squared, for better rasterization) and draw a bird's-eye view of the level on it."


Interestingly, however, there is very little on the Sunshine front. A couple of people have managed to do some very simple, and very stupid hacks, like superimposing the words "Too Ass!" when you die. It seems Sunshine, thanks to the GameCube abandoning ROMs in favor of ISO files, is perennially stuck in the same rut that birthed all of those early Super Mario Brothers hacks. In short, it would be a monumental task to create a workable creation engine for the game and nobody has taken the time to do it – at least not yet.

The ultimate question, then, is why? Why go through all of that work of designing and building levels? ROM hacks exist in a gray area and offer little chance of reward for the creator. Creators may get a few kudos on message boards, but where's the incentive to pour sixteen months of blood, sweat and tears into a project? According to some creators, it's out of love.

"Working on the game was like fulfilling a dream," says Houk. "Shigeru Miyamoto is my role model and having worked so intimately with SMB3 I feel as if I'm working with the legend himself."

Working on the projects are also a form of practice for game makers. There is no better way to learn game design than by taking a classic representation of the medium apart, digital brick by digital brick. Nobody knows this better than the many current industry folk that cut their teeth on Mario and company.

"It does make you think a little more about what actually makes levels fun to play," says FuSoYa, game designer and creator of a suite of Mario level-making tools called Lunar Magic. "Is it the exploration, the puzzles, the mechanics? Getting the balance right over a full game can be a surprisingly tricky thing."


Finally, that leads us to Mario Maker, Nintendo's forthcoming entrant into DIY level editing. Will this render the community moot, marginalizing these designers even further? After all, even the simplest hack requires a working knowledge of code. Moving a brick with a stylus does not.

"My initial expectation was that my game was dead in the water. I was surprised to see that interest had actually spiked after Nintendo's announcement of the game. I saw an immediate and sustained increase in views and downloads," says Andrew Kellog, a designer who has created several Mario games. "I'll have to wait and see what happens when Mario Maker launches, but currently its been helpful in getting my game more exposure."

We'll all have to wait and see what happens, as details regarding how Mario Maker will function, outside of the demo, are still scant. If there's one thing we can be sure of, however, there will be no phallic Goombas. In the meantime, the DIY Mario community keeps on trucking, pumping out extremely playable levels at a rapid clip.
[Images: Nintendo]
Lawrence Bonk is a freelance writer based out of Brooklyn, NY. You can follow him on Twitter at @sidescrollers.
In this article: mario-maker, nintendo, recommended, wii-u
All products recommended by Engadget are selected by our editorial team, independent of our parent company. Some of our stories include affiliate links. If you buy something through one of these links, we may earn an affiliate commission.