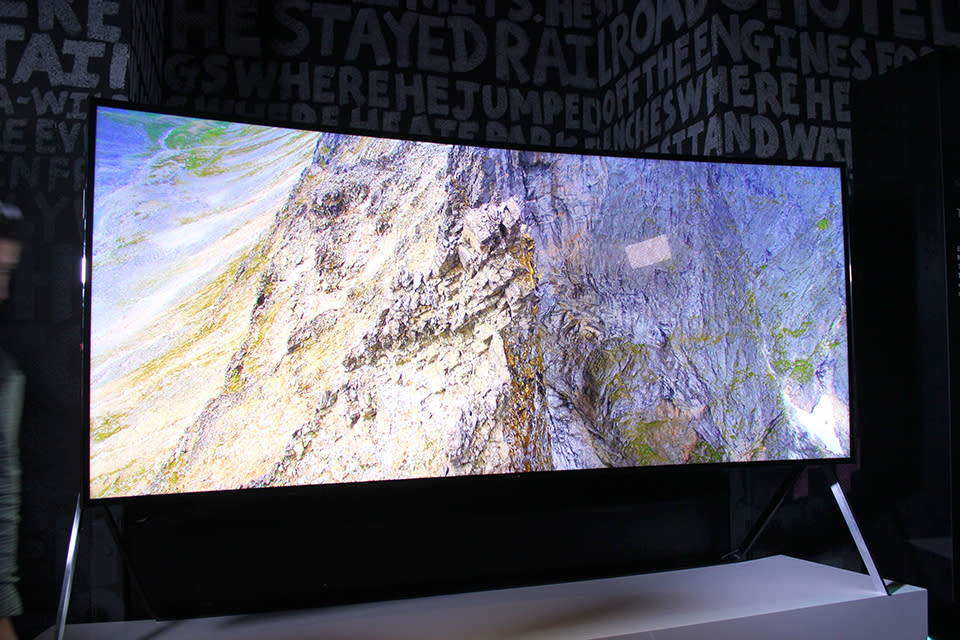 Samsung doesn't think your plain old UHD TV will cut it anymore. You know, like the models it debuted last year. Now what's the newest in new? SUHD, with the outfit saying it reserves the "S" designation for its top-tier models we're about to describe. The displays run Tizen and range from 48 inches to 88 inches in size, coming in three different model lines: JS9500, JS9000 and JS8500. Nanocrystal semiconductors are a portion of what sets these apart, with the tech apparently allowing for more accurate colors. The panels offer double the color adjustment points so your calibrator (or perhaps you) can dial the screen in to utmost accuracy and get a better idea of what the filmmaker intended, too. And, what's more, an onboard remastering process automatically analyzes image brightness to minimize power draw while beefing up contrast and video brightness. Oh, and of course Samsung has a quantum dot display of its own (pictured above) -- except it's 105 inches and bendable, combining the best of last year's models' size and flexibility. Naturally.

Regardless of all that, though, a TV without anything to watch is kind of pointless, right? That's where Samsung and 20th Century Fox's partnership comes in. The pair worked together to take another pass at a few scenes from the dreadful Ridley Scott flick Exodus: Gods and Kings, remastering 'em for use with the SUHD-specific tech. Samsung says the result was "spectacular" because that's the type of things press releases are supposed to mention. Expect to hear impressions of our own throughout the week.

In this article: BendableDisplay, ces2015, CurvedDisplay, hd, hdpostcross, JS8500, JS9000, JS9500, nanocrystals, QuantumDots, samsung, suhd, uhdtv
All products recommended by Engadget are selected by our editorial team, independent of our parent company. Some of our stories include affiliate links. If you buy something through one of these links, we may earn an affiliate commission.