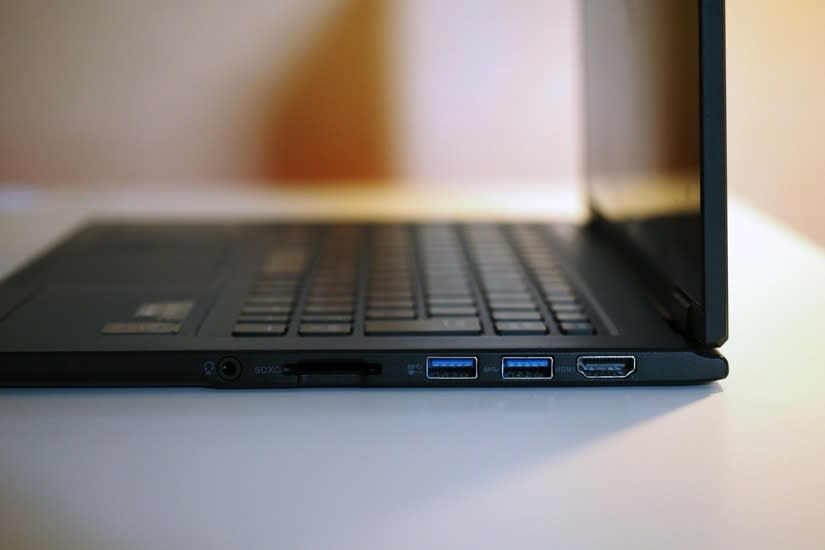 It's impossible to convey in a photo how light Lenovo's new ultraportable, the LaVie HZ550, is. So instead I'll say this: When I first picked it up, I was sure I was handling a prototype; some sort of dummy unit without any actual components inside. In fact, though, the HZ550 is very real, and at 1.72 pounds, it's stupidly, record-breakingly compact; in fact, Lenovo claims this is the world's lightest 13-inch laptop. What's more, the company just announced what it says is the lightest 13-inch convertible notebook: a machine called the HZ750, which has a 360-degree hinge that allows it to fold back into tablet mode. At 2.04 pounds, it's lighter than any laptop with a touchscreen and rotating hinge has the right to be. Either way, even in a field of increasingly skinny notebooks, both of these stand out. But let's back up for a minute. If the name "LaVie" rings a bell, it's because it was originally the brainchild of Japanese computer maker NEC, which is already known in its home country for making some pin-thin noteoboks. For four years, the two companies have been building laptops together as part of a joint venture, a deal that has allowed Lenovo to take a bite out of the Japanese PC market, the fourth largest in the world. What we're seeing now, though, are the first machines NEC and Lenovo are planning to sell outside the land of the rising sun. So while laptops this thin might already be commonplace in Japan, they're likely to be received in the United States as something of an oddity.

And odd they are. Not just because they're thin and light, mind you, but because they're actually quite powerful. Under the hood, you'll find surprisingly muscular parts -- none of this low-powered Core M business, but full-fledged fifth-generation Intel Core processors. Battery life, meanwhile, is rated for somewhere between seven and eight hours of video playback, which, if true, would put it on par with some significantly thicker and heavier laptops. An impressive thing, that -- especially since both machines will be offered with 2,560 x 1,440 screens. It isn't easy achieving long battery life when you have to light up quite that many pixels. The two LaVies also surprisingly sturdy, considering how insubstantial they feel in the hand. That's largely thanks to a magnesium-lithium alloy, which makes the machine light, but nigh on impossible to bend in your hand. In addition, Lenovo had to get creative with the display. According to the company, the HZ750's touchscreen is directly bonded, and uses film instead of cover glass. Additionally, Lenovo used one of Sharp's IGZO displays, which at least partially explains those big battery life claims -- after all, Sharp panels are known for being energy-efficient.

On paper, then, at least, the LaVies seem like the ultimate no-compromise machines: super thin, super light and still very powerful, with long battery life, to boot. If there are any tradeoffs we can glean just by looking at the spec sheet, it's that the HZ550 -- the 1.72-pound machine -- doesn't have a touchscreen. Meanwhile, the HZ750, the one with the 360-degree hinge, can't pull off quite as many poses as the Yoga line. In this case, you can use it as a notebook (natch), or fold it back into tablet mode, but you'd be putting it into Stand or Tablet mode at your own risk. The reason: The HZ750 is missing the sort of rubber bumpers you'd typically find on a Yoga. Because rubber bumpers make a machine thicker than it needs to be, don'tcha know. Interested? These arrive in May, and yes, they're priced like the no-compromise machines they are: $1,299 for the HZ550, and $1,499 for the HZ750.

In this article: ces, ces2015, hands-on, hz550, hz750, lavie hz550, lavie hz750, laviehz550, laviehz750, lenovo, nec
All products recommended by Engadget are selected by our editorial team, independent of our parent company. Some of our stories include affiliate links. If you buy something through one of these links, we may earn an affiliate commission.