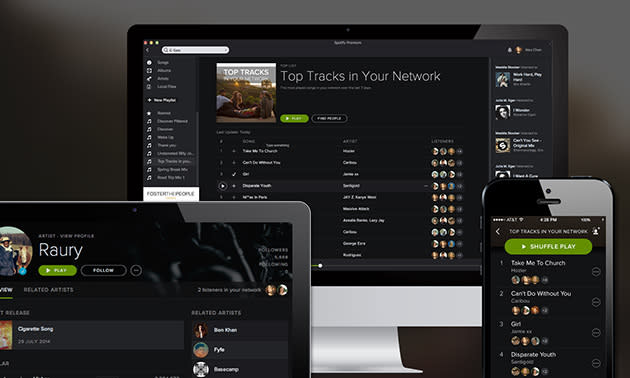 At the end of 2014, artists like Taylor Swift pulled their music from Spotify citing inadequate compensation and music being made available to non-subscribers free of charge. Those vocal lashings didn't stymie growth though, as the streaming service has added 2.5 million paying users since November, bringing its paid tally to 15 million. During that time, the total user count grew to 60 million -- up from 50 million in two months. What's more, the growth is accelerating: It took about 17 months for Spotify to move from 5 to 10 million, but roughly half that time to hit 15 million. This means that only a quarter of the company's active users are paying customers, a percentage that's remained consistent for a while now.

During December, Spotify offered three months for just 99 cents -- a move that certainly helped the Swedish company pad its numbers at the end of the year. Family plans were announced in October too, making it cheaper to hop on your sibling's membership rather than pay full price for your own. With the former promo set to expire this quarter, it'll be interesting to see how many folks stick around at $10/month.

Unfortunately, Rdio doesn't release its numbers, and the only concrete update on Beats Music came from Jimmy Iovine last May when he revealed the young service had 250,000 subscribers in its first four months. Back in July, Rhapsody revealed that it had hit the 2 million mark, claiming to be the clear "number two." Deezer, on the other hand, says it currently has 6 million paid accounts, and it'll add a couple million more in the US after nabbing Cricket Wireless' Muve Music last week. Of course, Deezer hasn't fully launched here in the States just yet. With Beats Music becoming a bigger part of Apple's plans and Deezer's widespread launch, Spotify will face some stiffer competition in the near future.

In this article: audio, music, spotify, stats, streaming, subscribers, users
All products recommended by Engadget are selected by our editorial team, independent of our parent company. Some of our stories include affiliate links. If you buy something through one of these links, we may earn an affiliate commission.