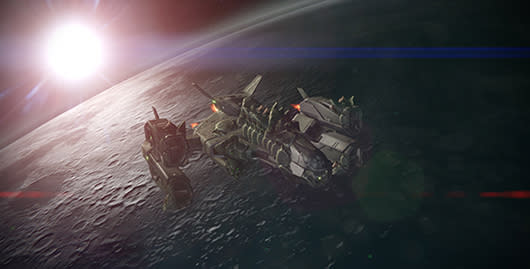 Next week, 'Crota's End' will get its revenge for all of the cheesy tactics used by Destiny players (maybe us included, maybe not. What's it to you?).

Bungie is unlocking hard mode for the latest raid on January 21, the developer revealed in an update today. In Crota's End hard mode, both Crota and standard enemies will be far more challenging. Thankfully, though, the mode features swanky new loot.

Those stamping out Crota in the mode will have a chance to earn powerful new primary weapons (see them after the break!), an exclusive color palette and a devious-looking ship known as "The Bane of the Dark Gods" (It's the ominous looking ship, above).

"If you've experienced Hard Mode in Vault of Glass, you have some clues for how we can scale up a Raid," Bungie says in the weekly update. "Prepare to take better care of your teammates. You'll have fewer options for healing yourself, and each other."

Croat's End hard mode is set to launch in Destiny at 1pm Eastern on January 21. Bungie also reminds players that playing Croat's End on hard mode will also be the "only place" to obtain the Crux of Crota, which will allow players to upgrade the Eidolon Ally – the auto rifle formerly known as Husk of the Pit – to its final form, the Necrochasm (below). In this article: Activision, Bungie, Crotas-End, Destiny, microsoft, playstation, ps3, ps4, xbox, xbox-one
All products recommended by Engadget are selected by our editorial team, independent of our parent company. Some of our stories include affiliate links. If you buy something through one of these links, we may earn an affiliate commission.