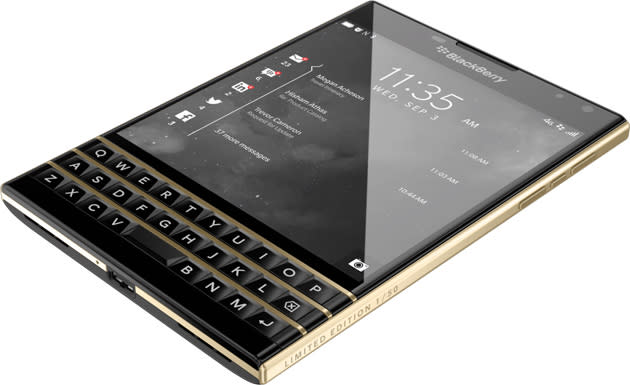 BlackBerry's Passport is already a fairly exclusive device by dint of the company's small market share, but the Canadian smartphone maker just kicked things up a notch. It's now selling a very limited edition (just 50 units) Black & Gold Passport that lets you flout convention with more gusto than usual. The gold-colored trim, while eye-catching, sadly isn't real like we've seen in some third-party mods -- c'mon, BlackBerry! However, you do get both a real soft leather back and an engraving that lets everyone know how rare your phone is. And despite the tiny production run, this is decidedly more affordable than the Porsche Design BlackBerrys aimed at celebrities and oil barons. It'll cost you a (relatively) modest $899 to score the Black & Gold Passport in the US, and $999 in Canada.

In this article: blackberry, blackberry10, gold, leather, limitededition, mobilepostcross, passport, smartphone
All products recommended by Engadget are selected by our editorial team, independent of our parent company. Some of our stories include affiliate links. If you buy something through one of these links, we may earn an affiliate commission.