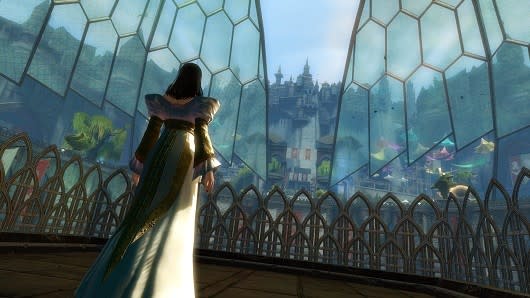 So you already knew about Guild Wars 2's big event at PAX South this Saturday, the Point of No Return panel, which has players crossing their fingers for an expansion announcement. If you can't go in person, you can watch the whole shebang on Twitch for the low, low price of nothing. And that deal just got even sweeter, as ArenaNet has just declared this morning that gaming icon and voice actress Jennifer Hale, known to GW2 fans as the voice of Queen Jennah and to everyone else as the voice of approximately eight million other characters, will be hosting the livestream.

Meanwhile, the studio has vowed to slash the price of the buy-to-play MMO to $9.99 on Saturday and Sunday in honor of the hoopla, marking the biggest sale for the game it's held to date. Characters in-game will be showered with sales on boosters and a free double-experience bonus that lasts all weekend.

Massively GW2 expert Anatoli Ingram speculated about the possible expansion and analyzed the final season 2 episode in his most recent columns.

In this article: anet, arenanet, buy-to-play, con, convention, double-exp, double-experience, double-experience-weekend, event, event-coverage, events, expo, fantasy, guild-wars-2, gw2, jennifer-hale, massively-event-coverage, ncsoft, panel, pax, pax-2015, pax-south, pax-south-2015, penny-arcade-expo, point-of-no-return, queen-jennah
All products recommended by Engadget are selected by our editorial team, independent of our parent company. Some of our stories include affiliate links. If you buy something through one of these links, we may earn an affiliate commission.