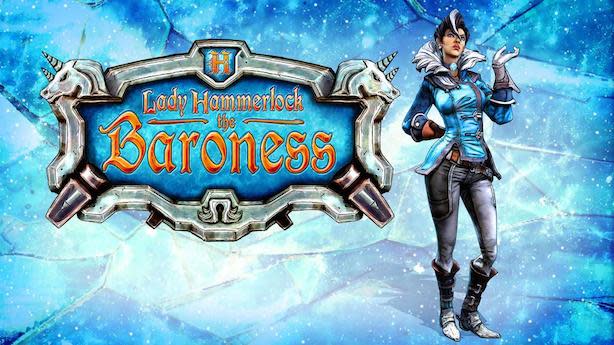 Lady Hammerlock, sister to researcher Sir Hammerlock and heir to the family's fortune, will add a bit of class to Borderlands: The Pre-Sequel's playable lineup on January 27. Aurelia is included in The Pre-Sequel's season pass, but a related press release notes that fans who prefer to pick up DLC a la carte can also don her fashionable demeanor for $9.99.

Lady Hammerlock's progression branch into Huntress, Cold Money and Contractual Aristocracy skill trees. Huntress focuses on sniping, offering a skill that dishes out critical hit bonuses for each consecutive shot on a target. Cold Money is all about ice damage, as made evident by one of its abilities implementing Cryo damage with any equipped weapon. Contractual Aristrocracy is all about status, as suggested by one of its unlockables reaping Lady Hammerlock bonuses from kills made by her peasant teammates.

When firefights call for desperate measures, Lady Hammerlock's Cold As Ice action skill spawns a Frost Diadem Shard that chases down and latches onto targets, dealing constant damage until they finally keel over so that the shard can move onto its next target.

If you sat out The Pre-Sequel in hopes of a current-gen port but still want to freeze things to death as Lady Hammerlock, don't fret – Borderlands Handsome Collection will include all season pass DLC when it arrives on March 24.
[Image: Gearbox]
In this article: baroness, borderlands, borderlands-the-pre-sequel, lady-hammerlock, lady-hammerlock-the-baroness, linux, mac, microsoft, pc, playstation, ps3, xbox
All products recommended by Engadget are selected by our editorial team, independent of our parent company. Some of our stories include affiliate links. If you buy something through one of these links, we may earn an affiliate commission.