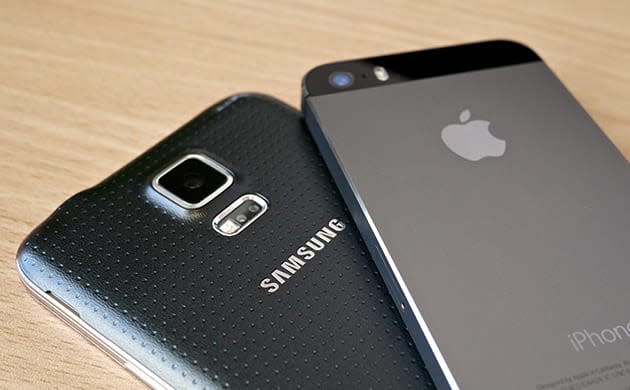 When people talk about Apple and Samsung, the lazy narrative is to say that Apple makes the most money, but Samsung makes the most devices. According to Strategy Analytics, however, that story may no longer actually be the case. In its latest look at the state of the industry, Apple and Samsung both shipped an estimated 74.5 million devices in the last three months of 2014, making them joint first in the shipments race. Of course, this was the first period where both the iPhone 6 and 6 Plus were made available, but even still, those are some hefty numbers.

Overall, 1.3 billion smartphones were shipped in 2014, of which 81 percent were Android devices. More specifically, the fourth quarter of the year saw shipment figures increase to a record 380.1 million handsets, but Samsung wasn't the company benefiting from the boost. In fact, by these numbers, the company has seen its market share slide from 30 percent at the end of 2013 to just 20 percent now. The report talks about how Apple is eating the company's lunch at the high-end, Huawei in the middle and Xiaomi, amongst others, at the bottom. The report also suggests that if Samsung wants to stem the flow of blood from its veins, it should try and buy some companies like BlackBerry. Sitting pretty in third place, meanwhile, is Lenovo - now that it's successfully bought Motorola - while Huawei sits in fourth spot thanks, in part, to its efforts in China and Africa.

In this article: Analysis, apple, Huawei, Lenovo, samsung, Shipments, Strategy Analytics, StrategyAnalytics
All products recommended by Engadget are selected by our editorial team, independent of our parent company. Some of our stories include affiliate links. If you buy something through one of these links, we may earn an affiliate commission.