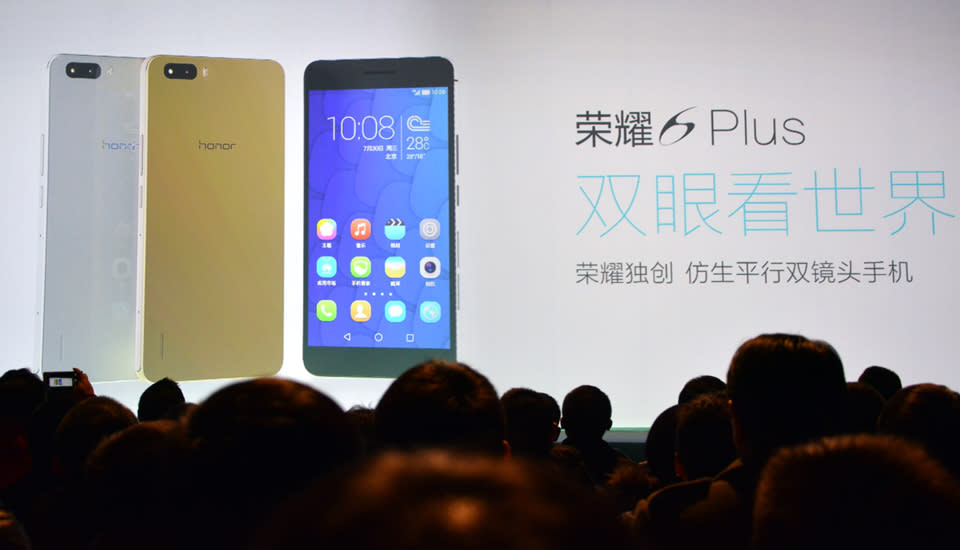 Judging by Huawei's latest smartphone unveiled in Beijing today, it looks like someone has taken a leaf out of HTC's playbook. The Honor 6 Plus -- a follow-up to the reasonably priced Honor 6 -- is all about its dual rear 8-megapixel cameras, which claim to boost the effective pixel size to 1.98 microns for improved sensitivity and thus cleaner images. By comparison, this almost matches HTC's 2-micron UltraPixels. And similar to HTC's Duo Camera feature, Huawei's dual-lens setup lets you refocus the captured photos, adjust their simulated aperture (you can go from f/0.95 all the way to f/16) and apply fun filters like tilt shift, sketch and comics. Even the front-facing camera has an 8-megapixel resolution to give you the "888" blessing (it implies "triple the fortune" in Chinese), along with the usual beautification feature for photos and videos -- both recording and live chat. Despite stuffing three 8-megapixel cameras into the phone, Huawei didn't make much compromise elsewhere. At least that's the case on paper, anyway. The metallic device comes with a vibrant 5.5-inch 1080p JDI negative LCD, Huawei's own Kirin 925 octa-core chipset, a low-power I3 coprocessor (for fitness tracking), 3GB of RAM, up to 32GB of internal storage, a 3,600mAH battery, NFC, TD/FDD-LTE Cat 6 connectivity and dual-SIM slots -- one of which doubles as a microSD tray, supporting up to 128GB of expansion. Like its recent sibling devices, the Honor 6 Plus has an infrared transmitter to let you control your TV, Hi-Fi system and air conditioner. Just to give its competitor a quick jab, Huawei pointed out that its latest phone is lighter, runs cooler, has less bezel space and yet has more battery juice than Apple's similarly-named iPhone 6 Plus. On the software side, the Honor 6 Plus runs a heavily-customized EMUI 3.0 Android ROM which has some nifty features, especially when the screen is off. For example, you can double-click the volume-down button to instantly take a photo; double-click volume-up to start recording a voice memo (great for us tech reporters); and draw custom gestures to trigger your desired apps.

As part of the package, Huawei is offering 100GB of lifetime cloud storage, free access to over 8 million WiFi hotspots globally (7 million of which in China) and the company's own SoftSIM data roaming subscription service (about 80 cents per 20MB or about $4.5 per day; commencing in 2015 Q1) to Honor 6 Plus users. Alas, these services are likely limited to users in China.

As before, pricing isn't a concern here. The Honor 6 Plus will come in two editions: the 16GB, 3G-only and NFC-less version will cost just CN¥1,999 or about $320 unsubsidized, and you can get it in either black or white. The 4G premium edition, meanwhile, is priced at CN¥2,499 or about $400, and you get an additional gold color option.

In this article: android, china, dual-camera, dualcamera, honor, honor 6 plus, honor6plus, huawei, kirin925, mobilepostcross, octa-core, phone
All products recommended by Engadget are selected by our editorial team, independent of our parent company. Some of our stories include affiliate links. If you buy something through one of these links, we may earn an affiliate commission.