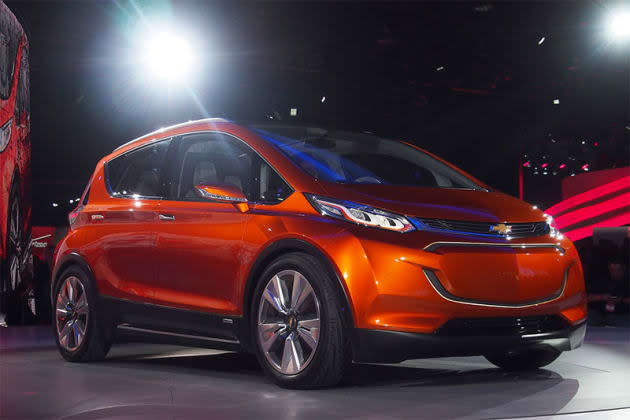 Chevrolet is moving forward with its plans to build the long-range, all-electric Bolt. The crossover-style EV was unveiled a month ago as a concept car at the North American International Auto Show in Detroit, not far from the Orion Assembly plant, where the carmaker will begin manufacturing the electric vehicle. When it was unveiled, the company announced target specs including a 200-mile range and a price of around $30,000. Those numbers would put it in direct competition with Tesla's upcoming Model 3 EV. By comparison, Chevy's $27,000 Spark EV city car manages roughly 82 miles on a charge.

GM's Orion Assembly plant is also where the Chevy Sonic and Buick Verano are manufactured. A company representative says the site makes sense for the Bolt, citing the location's track record for efficiency and its use of solar and landfill gas energy. Chevy says it's pouring in about $200 million into the plant to prepare for the all-electric vehicle, which builds upon the battery tech found in the company's Volt plug-in hybrid and Spark EV. The company's press release uses language like "based on the Bolt EV concept," so don't expect the finished product to look exactly like the bright orange, five-door tall hatchback we saw in January. Chevy's official announcement doesn't mention a start date for manufacturing, nor when we should expect to see the Bolt in showrooms, though rumors have suggested a debut in 2016-2017.

In this article: auto, bolt, cars, chevrolet, Chevy Bolt, EV, Tesla, Tesla Model 3
All products recommended by Engadget are selected by our editorial team, independent of our parent company. Some of our stories include affiliate links. If you buy something through one of these links, we may earn an affiliate commission.