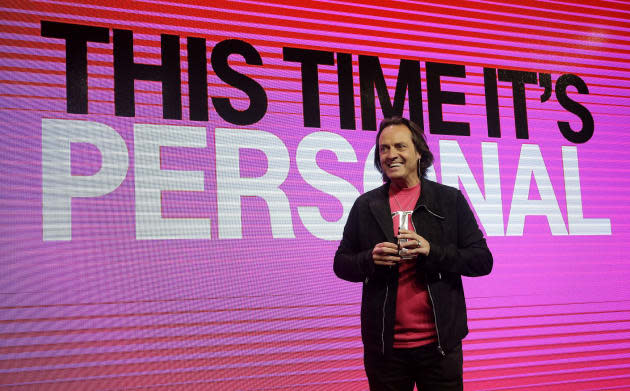 T-Mobile kicked off 2014 by crashing an AT&T party, and finished it with "our best year in company growth ever," according to CEO John Legere. To be exact, it added 8.3 million new customers over the year, including a million "postpaid," clients in the last quarter of 2014. The Uncarrier chalked that success up to its tweaked Simple Choice plans, saying that 89 percent of all postpaid customers are now on them. It also added 1.2 million prepaid clients over the year, all of which resulted in 19 percent more revenue and a net profit of $5.6 billion in 2014. For the sake of comparison, AT&T said it picked up 5.6 million customers in 2014, but then again it has 120 million wireless customers compared to 55 million for T-Mobile.

This year, T-Mobile tweaked its prepaid, contract-free Simple Choice plans, adding more data, tethering, unlimited international calls for $5/month and more. Last month, it added its "Stash" option, letting you rollover unused data for a full year. However, it failed to pick up much new 4G spectrum in the last month's auction, spending just $1.7 billion compared to $18.2 billion for AT&T.

That prompted Legere to blast the FCC's rules, saying that a large chunk of spectrum should be reserved for smaller carriers in the next auction. Specifically, he said that half of it should be made available to competitors of AT&T and Verizon, since they already control 73 percent of low-band spectrum. He added that the auction should happen as soon as possible to prevent the two giants from building up a war chest. Despite that, T-Mobile purchased $2.5 billion worth of 700Mhz LTE spectrum from Verizon last year, and plans to "rapidly" deploy it by year's end.

UPDATE: John Legere took a moment during the customary post-earnings conference call to talk about a bit of boasting he did on Twitter back in August. By his math, T-Mobile really did build a subscriber base to beat Sprint's -- by dint of new subscriber surges and the MetroPCS acquisition, the carrier now has 55 million customers. That's just about where Sprint is too, but Legere pointed out a technicality in Sprint's earnings filings that basically suggest that the carrier is counting more prepaid subscribers among its ranks than it should be. It's a juicy bit of inside baseball -- we'll see if the gulf gets more noticeable in another three months.

In this article: earnings, financials, growth, mobilepostcross, t-mobile, uncarrier
All products recommended by Engadget are selected by our editorial team, independent of our parent company. Some of our stories include affiliate links. If you buy something through one of these links, we may earn an affiliate commission.