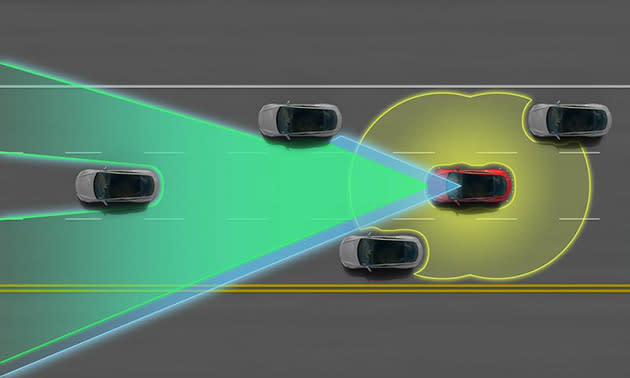 The self-driving future is almost here -- if you've got one of Tesla's Model S cars. Tesla CEO Elon Musk just announced that it'll be bringing its new automatic steering mode, simply dubbed "autopilot," to the Model S lineup in three to four months via a software update. Musk says you'll basically be able to "go between San Francisco and Seattle without the driver doing anything." He's also careful to point out this isn't true self-driving, just very powerful automatic steering (it was announced alongside the dual-motor Model S in October). The downside? It's only available on highways, and it requires one of Tesla's $4,250 "optional tech" package. Musk notes that the company's current technology likely won't be safe in suburban neighborhoods, which often have random obstacles like kids playing in the street. Eventually, you'll be able to have your Model S park itself or drive up to you in a parking lot -- just don't expect to do that on public roads.

We've already seen plenty of car companies offer things like assisted parallel parking -- an evolved form of cruise control seems like the next logical step. We'll be interested to see how, specifically, the new autopilot mode works though. Actual self-driving cars from Google and others rely on a bevy of sensors that the Model S likely doesn't have, even with the autopilot package, which is probably another reason autopilot won't work in more populated areas. Tesla also unveiled two new software features today aimed at curbing range anxiety (without actually increasing the mileage on its Model S).

In this article: autopilot, Model S, self-driving, Tesla
All products recommended by Engadget are selected by our editorial team, independent of our parent company. Some of our stories include affiliate links. If you buy something through one of these links, we may earn an affiliate commission.