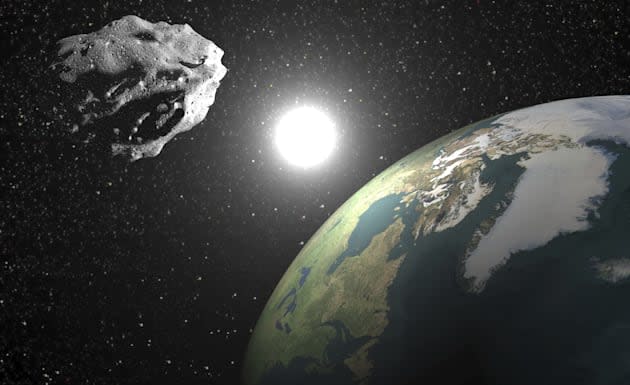 NASA is finally done assessing its two options for the Asteroid Redirect Mission (ARM). Its final choice? Option B: it plans to grab a chunk of its target asteroid and take the boulder-sized piece to the moon's orbit. While Option A sounded more exciting -- it entailed capturing an entire asteroid -- NASA has decided to go with this one, because it will allow the agency to test new technologies for future manned trips to Mars. One of those technologies is called Solar Electric Propulsion (SEP), which uses sunlight instead of traditional fuel. More specifically, it uses solar arrays to convert sunlight into power, which propels charged atoms that move the spacecraft -- it's not as fast as rocket propulsion, but it could save manned missions a lot of money.

The agency will name its target asteroid in 2019, a year before the ARM spacecraft is scheduled to launch. It's eyeing Itokawa, Bennu and 2008 EV5 at the moment, but it's still looking for more viable candidates. Once it finds its target, the spacecraft will spend 400 days circling the asteroid to test a technique that could prevent one from crashing into Earth. No, not drilling and embedding an explosive into it, but using the spacecraft's gravitational field to alter the asteroid's orbit. After that, the vehicle will deploy a robotic arm to the surface of the celestial object to dig up a boulder, and then embark on a six-year journey to bring the sample rock to the moon's orbit.

The mission doesn't end there, though. In mid-2020s, after the boulder reaches its destination, NASA will send a manned spacecraft aboard the SLS rocket to rendezvous with and collect samples from it. At the moment, the agency's planning to deploy a two-person crew to the site for 25 days, but that might change when the time comes. That will serve as some sort of trial phase for the astronauts, giving them ideas on how to best collect and return samples from Mars.

In this article: asteroid, asteroidredirectmission, NASA
All products recommended by Engadget are selected by our editorial team, independent of our parent company. Some of our stories include affiliate links. If you buy something through one of these links, we may earn an affiliate commission.