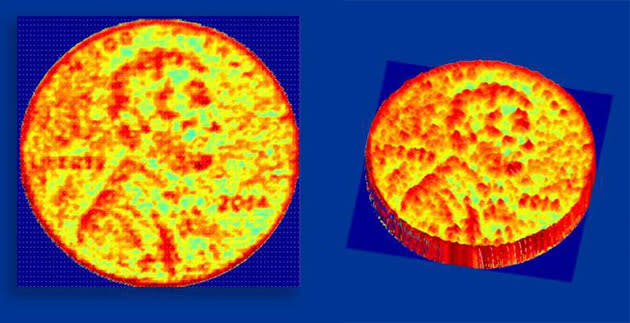 Wouldn't it be great if we can use phones to 3D scan every day objects for printing? A research team from Caltech has designed a cheap and tiny camera chip that could make that happen. Even better, the team claims it can take 3D scans so precise, it could lead to "replica[s] accurate to within microns of the original object[s]." The silicon chip called nanophotonic coherent imager (NCI) is less than a millimeter square, so it can fit within actual phones or cameras without the need for extra hardware. It can capture an object's height, depth and width using tiny LIDARs that immerse an object in laser beams. The light that bounces off the object is then analyzed to determine its size and other details.

Here's Caltech's explanation of the technology behind the chip:

Such high-resolution images and information provided by the NCI are made possible because of an optical concept known as coherence. If two light waves are coherent, the waves have the same frequency, and the peaks and troughs of light waves are exactly aligned with one another. In the NCI, the object is illuminated with this coherent light. The light that is reflected off of the object is then picked up by on-chip detectors, called grating couplers, that serve as "pixels," as the light detected from each coupler represents one pixel on the 3-D image. On the NCI chip, the phase, frequency, and intensity of the reflected light from different points on the object is detected and used to determine the exact distance of the target point.

Caltech's current prototype can scan only small items at the moment -- the coin in the image above, for instance -- but the team's working on one that can handle larger ones. LIDAR, by the way, is an effective way to identify objects and locations, so you'll often hear it associated with emerging technologies such as robots and self-driving cars. In fact, aside from having a bright future in 3D scanning, the chip could also be used on self-driving cars in the future as a safety measure to prevent collisions.

In this article: 3dPrinting, 3dScanner, caltech, LIDAR
All products recommended by Engadget are selected by our editorial team, independent of our parent company. Some of our stories include affiliate links. If you buy something through one of these links, we may earn an affiliate commission.