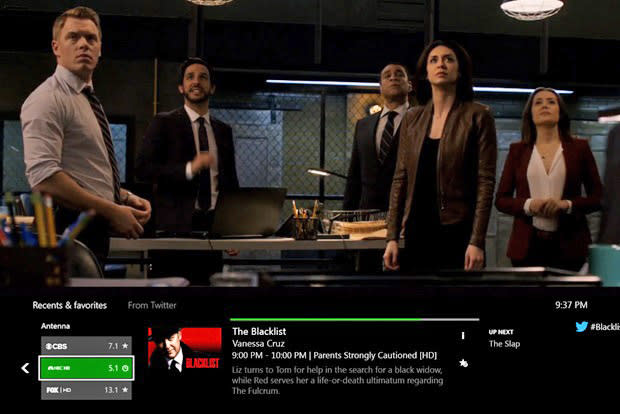 Last year Microsoft added a feature to European Xbox Ones that brought broadcast TV directly to the box, and now it's starting to roll out the same thing in the US and Canada. Currently available for users in the Preview Program, it combines with a TV tuner from Hauppauge (BYO antenna -- the tuner retails for $80 but is currently $61 on Amazon) to cut out the cable middleman, and let owners watch the TV signals that are floating about freely. A $60 version of the tuner built specifically for the Xbox One is coming soon. While it doesn't turn the console's hard-drive into a DVR, it does have DVR-like features with the ability to pause live TV for up to 30 minutes, and it can stream TV to a phone or tablet running the SmartGlass app.

We've seen a couple of major TV providers launch apps for Xbox One (in addition to Verizon and Time Warner Cable, AT&T has a U-verse app currently available), but they mostly have not helped the game system in its effort to meld with daily TV watching. As the Xbox News post points out, with a combination of the antenna and the recently-released Sling TV app, owners can get most of the big TV channels without needing cable or satellite at all. Meanwhile, in Europe, Digital TV Tuner support will come this year to 11 more countries: Austria, Belgium, Denmark, Finland, Ireland, Netherlands, Norway, Poland, Portugal, Sweden, and Switzerland. Of course, this still isn't the Xbox 360's Windows Media Center feature that could handle cable or OTA, work with the best DVR money could buy and more, but it appears this is the strategy to control input one that Microsoft is following now. It's not the only one either, as the number of cord cutters has risen, others like TiVo are offering products that are specifically designed to combine free TV with internet sources. Like Microsoft, Google went from pushing HDMI passthrough and IR blasters on Google TV to simpler support for broadcast TV tuners in Android TV. Meanwhile, Sony is working on PlayStation Vue, its internet TV service that includes your local broadcast networks. The only downside there? PlayStation Vue has a relatively high monthly charge and is only available in a few areas, but hey, at least there are choices, and more are likely on the way.

In this article: antenna, Canada, Hauppauge, hdpostcross, ota, tv, US, video, WindowsMediaCenter, xboxone
All products recommended by Engadget are selected by our editorial team, independent of our parent company. Some of our stories include affiliate links. If you buy something through one of these links, we may earn an affiliate commission.