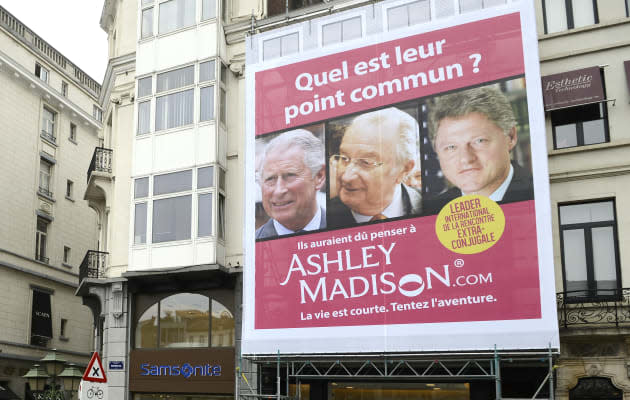 It may sound like a high-end department store, but Ashley Madison is actually a hookup network for people who want some extra-marital, no-strings attached sex. As much as we pretend that the site caters to a small niche, the truth is that its parent company is struggling to keep up with the demand. That's why it's reportedly preparing to go public in the hope of raising $200 million to fund international expansion.

According to the company, Ashley Madison is the second most profitable dating enterprise on the internet, second only to Match. Unlike its rival, the service is geared up to cater to people in committed relationships who are looking for some extra fun.

If you can't speak French, then the advert pictured above reads "What do they have in common? They should have thought about Ashley Madison." The three men depicted in the poster, Bill Clinton, Prince Charles and King Albert II of Belgium are all believed to have had an extra-marital affair in their time. Ironically, however, the site's biggest critic is also its founder, Noel Biderman, who said that he'd be "devastated" to learn that his wife used the site.

Unfortunately, as profitable as the site may be, the road to riches offered by a public offering hasn't been easy to take. This is probably because the company's seedy image -- its slogan is "Life is short. Have an affair" -- is too much even for the debauched fiends of Wall Street. An IPO was attempted in 2010, but as the company's Christoph Kraemer told Bloomberg, investor appetite in North America and Canada was scarce. This time, the company will try in London because of Europe's more relaxed attitude towards sex.

The IPO is planned to arrive later this year and, if it's successful, could easily eclipse that $200 million figure. It'll also ensure that, if they didn't have to before, Noel Biderman and chums probably won't ever have to work ever again. See what I mean? Adultery is big business.

In this article: AdultThemes, AshleyMadison, Business, culture, IPO, sex, TL16AshMadHck
All products recommended by Engadget are selected by our editorial team, independent of our parent company. Some of our stories include affiliate links. If you buy something through one of these links, we may earn an affiliate commission.