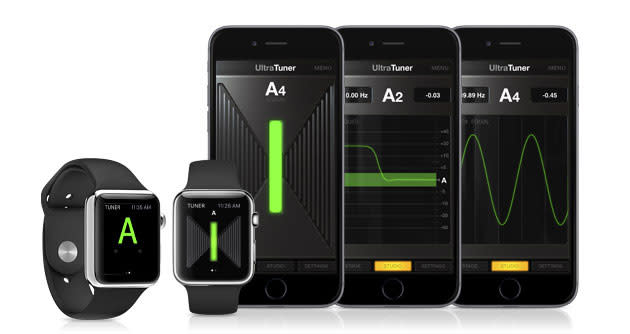 The Apple Watch is handy for a lot of things, and now you can use the wearable when you tune your axe. Thanks to the folks at IK Multimedia, when you employ the company's UltraTuner app for iOS, note info is beamed to your wrist while tuning that stringed instrument. The software's Stage mode offers a full-screen interface for maximum visibility, and when this setting is selected, a smaller version of the chromatic tuner is displayed on the wearable. IK Multimedia claims that UltraTuner is ten times more accurate than mechanical strobe options -- down to +/- 1/100th of a cent. As you might expect, those figures make it the most accurate tuner available for iOS. If you've already splurged for the $5 app, you'll need to update to the most recent version to pair it with the Apple Watch.

In this article: app, applewatch, guitar, guitartuner, IkMultimedia, mobilepostcross, software, tuner, ultratuner
All products recommended by Engadget are selected by our editorial team, independent of our parent company. Some of our stories include affiliate links. If you buy something through one of these links, we may earn an affiliate commission.