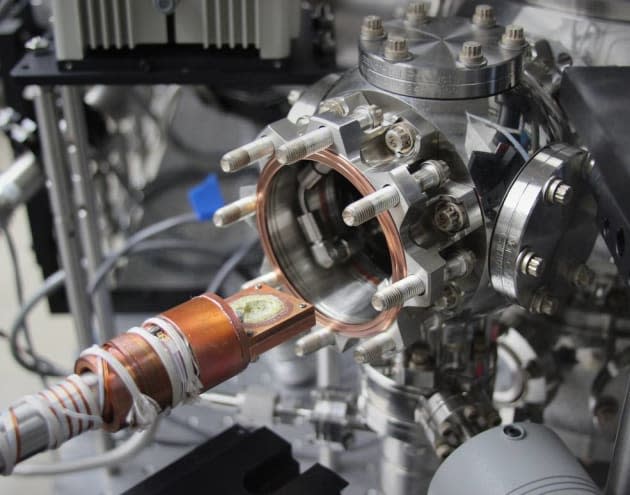 Astronomers have spent more than a decade trying to identify the dark substance erupting from geological features on the surface of Europa. Now, a team of researchers at NASA's Jet Propulsion Lab believe they've identified the mystery material as sea salt. You know, from the ocean that NASA suspects is hiding under Europa's icy surface. The team, led by planetary scientist Kevin Hand, began its investigation by building a testing device that recreates the extreme conditions found on the gas giant's moon. "We call it our 'Europa in a can,'" Hand said in a statement. "The spectra of these materials can then be compared to those collected by spacecraft and telescopes." With it, the team subjected samples of common table salt (sodium chloride) to negative 280 degree Fahrenheit temperatures, intense radiation and near-vacuum conditions. After just a few hours, the previously white salt began to darken (as you can see above). Interestingly, the longer the team left samples in the device, the darker the samples became. When Hand's team inspected the salt samples, they found the chemical compound's spectra bore a striking resemblance to data gathered during previous studies by the Galileo spacecraft. "This work tells us the chemical signature of radiation-baked sodium chloride is a compelling match to spacecraft data for Europa's mystery material," Hand said. Unfortunately, Earth-based telescopes lack the resolution needed to corroborate the team's findings so NASA will have to wait for a future mission to Jupiter to confirm these results.

In this article: astrochemistry, astronomy, chemistry, europa, JetPropulsionLaboratory, JPL, jupiter, moon, NASA, salt, Space
All products recommended by Engadget are selected by our editorial team, independent of our parent company. Some of our stories include affiliate links. If you buy something through one of these links, we may earn an affiliate commission.