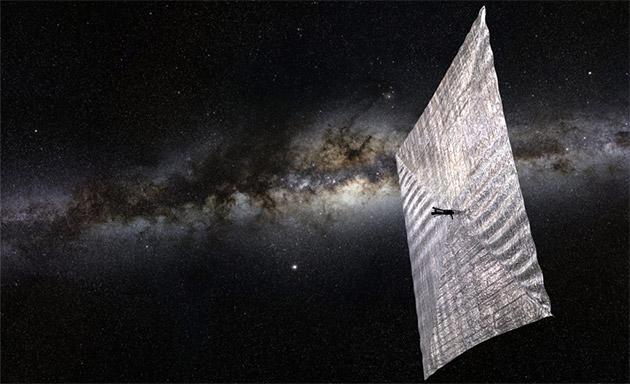 The LightSail is blasting off to space (along with the X37B drone) for a test flight on May 20th, but the project still needs a lot more money for its first major mission in 2016. To be precise, Bill Nye and The Planetary Society still need a hefty $1.2 million, part of which they're now trying to raise via Kickstarter. The team set a more realistic $200,000 goal, but they do have stretch goals up until $1 million, which will cover the construction, testing and deployment of the final version, as well as LightSail's operations in space for a few months. Obviously, you can't get one of solar-powered spacecraft as a reward for backing the project, so you'll have to make do with posters, jackets and signed paraphernalia.

LightSail was originally conceptualized by Carl Sagan as a "solar sailer," a spacecraft that uses the sun's radiation for propulsion. The Planetary Society, a non-profit org headed by Bill Nye, is attempting to make its own version -- the current model is a CubeSat no bigger than a breadbox with four sails. If the team manages to raise enough money, LightSail will be sent to orbit (at an altitude of 447 miles) aboard a SpaceX Falcon Heavy rocket in 2016.

In this article: kickstarter, lightsail, space
All products recommended by Engadget are selected by our editorial team, independent of our parent company. Some of our stories include affiliate links. If you buy something through one of these links, we may earn an affiliate commission.