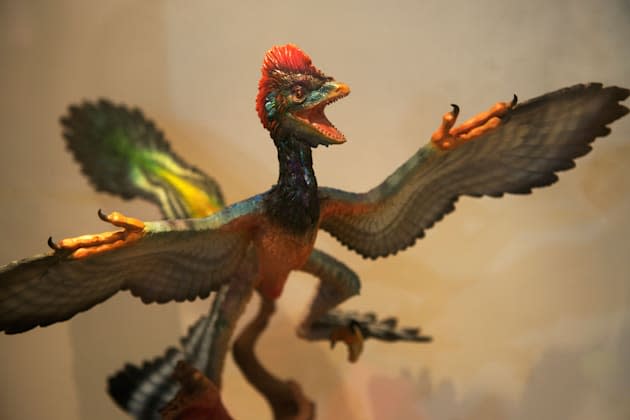 How do scientists study the evolutionary transformation from snouts to beaks as those winged dinosaurs became birds? By putting dinosaur snouts on chickens, of course. A team of researchers at Yale were able to modify the chickens' genetic make up in a way that would make then grow a snout like their ancestors (similar to the Anchiornis model above) rather than the beaks we're all familiar with. The modification allows scientists to study the molecular foundations of the evolution. More specifically, they can examine the difference in bone structure and the genetic pattern birds exhibit that reptiles and mammals don't -- the one that causes a beak to form. Despite how awesome it would be, the research had nothing to do with building a real-life Jurrasic Park.

In this article: beaks, birds, chickens, dinosaurs, dna, evolution, genetics, science, snouts
All products recommended by Engadget are selected by our editorial team, independent of our parent company. Some of our stories include affiliate links. If you buy something through one of these links, we may earn an affiliate commission.