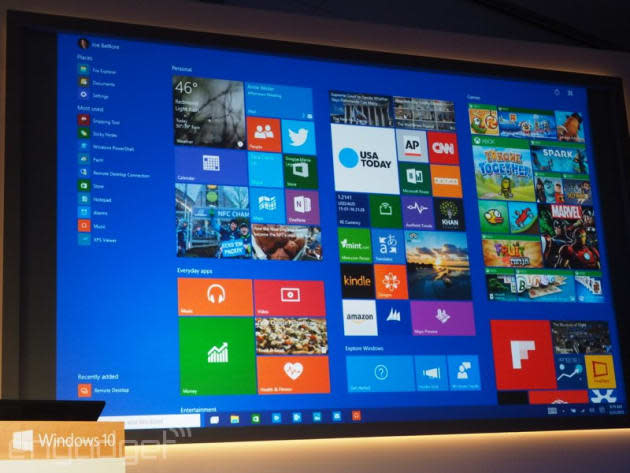 A new Windows release wouldn't be the same without many different versions of the OS to confuse the heck out of you. Microsoft finally gave us the skinny on Windows 10's upcoming versions today -- and they're all pretty familiar to Windows fans. There's the usual "Home" version for mainstream consumers and the "Pro" version for business users. The latter is different from Windows 10 Enterprise, which is meant for bigger organizations with support for large-deployments. There's also a version of Windows 10 targeted specifically at schools, which is likely part of Microsoft's plan to take on Google's Chromebooks. On the phone front, Windows 10 Mobile is what you'll see on most consumer devices, but there's also a "Mobile Enterprise" version for businesses.

Windows 10 is still on track for release later this summer, and it will be available free to existing Windows 7 and 8 users for the first year. Microsoft revealed at its Build conference that it would be staggering the OS's release across different device types, so don't expect to have it on a phone until the fall.

Since there's still no mention of a new Windows RT, the ill-fated version of Windows 8 meant for ARM-powered devices, it's safe to call that edition of the OS dead. The mobile version of Windows 10 will support phones with ARM chips, but all of the desktop versions are geared towards x86 chips. That's not a huge surprise, since Microsoft even chose to go with an Intel chip for its latest Surface, a product line that previously served as a Windows RT showcase.

In this article: microsoft, Windows 10
All products recommended by Engadget are selected by our editorial team, independent of our parent company. Some of our stories include affiliate links. If you buy something through one of these links, we may earn an affiliate commission.