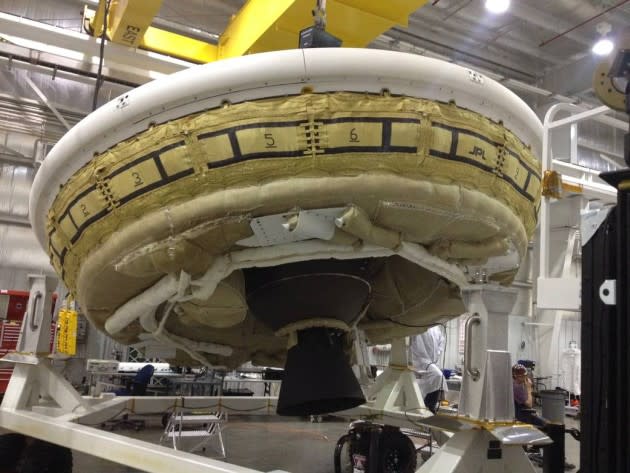 If you need something to watch that's not Apple related, the Low Density Supersonic Decelerator(LDSD) that NASA hopes will help Mars missions land safely is about to undertake its next test. After more than a week of delays caused by bad weather, the saucer shaped vehicle will launch at about 1:30PM ET. After that, it's in for a three hour wait to reach an altitude of 120,000 feet before it's dropped and the rocket-powered portion of its trip will begin. Once it reaches Mach 3, the Decelerator's inflatable "drag devices" will deploy, slowing things down enough for it to deploy a parachute, and then land in the ocean. Check out the live stream embedded after the break (plus a clip from its test last fall), and we'll update you on its progress throughout the day.

Update: The craft is almost to its 120,000 foot release height, where it will drop from the balloon and fire its rocket to climb even higher, which is scheduled to happen at about 5:35PM ET.

Update 2 (5:42PM): As you can see from the live stream after the break, the rocket-powered flight went off as scheduled, however the redesigned supersonic parachute failed again.

Are you watching? Live coverage of our #LDSD test vehicle ascending to 120,000 feet now: http://t.co/KX5g7yYnYG pic.twitter.com/l9PLBylr1G

In this article: flyingsaucer, ldsd, mars, NASA, test, video
All products recommended by Engadget are selected by our editorial team, independent of our parent company. Some of our stories include affiliate links. If you buy something through one of these links, we may earn an affiliate commission.