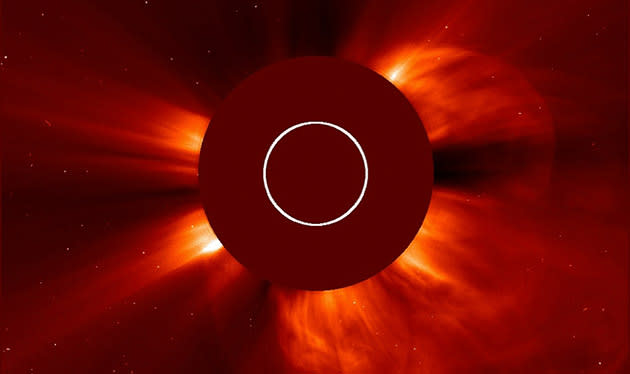 Solar geomagnetic storms could sometimes cause telecommunication disruptions and power outages -- problem is, we can only predict if they're destructive 30 to 60 minutes before they arrive. Now, galactic weatherman NASA Goddard scientist Neel Savani has started testing a new forecast model that will allow the agency to warn utility or telecommunication companies 24 hours beforehand. The agency says these damaging storms are caused by coronal mass ejections (CME), or massive bursts of gas and materials from the sun, which are aligned in the opposite direction of the Earth's magnetic field. We unfortunately don't have the tools to figure out a CME's configuration until it's close enough to the planet.

Once Savani figured out that previous models assumed CMEs come only from the most active spot on the sun, he was able to solve the issue and include other spots that also burp out solar materials into his measurements. He can now use those measurements to predict what a CME's configuration is with help from coronographs taken by the ESA/NASA Solar and Heliospheric Observatory, or SOHO. Those coronographs show how the CME moves as it makes its way to Earth. The model can also tell "which parts of the CME will have magnetic fields pointed in which direction," according to NASA.

Savani has tested the model on eight CMEs, thus far, and will continue testing it on more to ensure it's truly accurate. He plans to build an easy-to-use application after those tests, which will make the process a lot quicker. If successful, the US National Oceanic and Atmospheric Association (NOAA) can use it coupled with the DSCOVR satellite, which has just reached orbit, to keep a close eye on space and solar weather.

In this article: nasa, space
All products recommended by Engadget are selected by our editorial team, independent of our parent company. Some of our stories include affiliate links. If you buy something through one of these links, we may earn an affiliate commission.