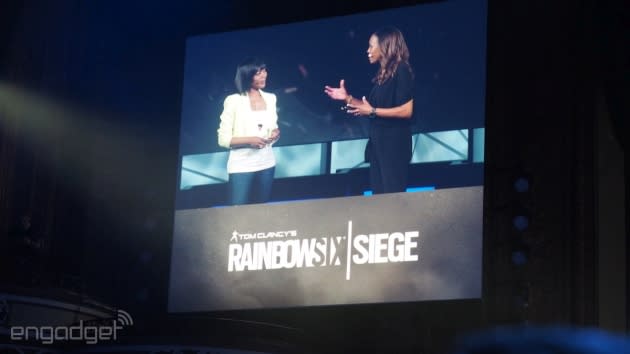 Last year Call of Duty brought Kevin Spacey, and for 2015, Ubisoft is calling on Angela Basset to star in its next Rainbow Six game. Named Six, she's the leader of your terrorist-hunting squad, doling out the intel needed to eliminate targets. Ubisoft also showed off a live demo of five players participating in the revamped Terrohunt mode that can be played solo or cooperatively. Rainbow Six Siege is set for release on October 13th, while a beta on all platforms (PC, PS4, Xbox One) is scheduled for September 24th offering both PvP and Terrohunt -- sign up here.

In this article: AngelaBassett, e32015, hdpostcross, PC, Playstation4, PS4, rainbowsix, rainbowsixsiege, ubisoft, video, XboxOne
All products recommended by Engadget are selected by our editorial team, independent of our parent company. Some of our stories include affiliate links. If you buy something through one of these links, we may earn an affiliate commission.