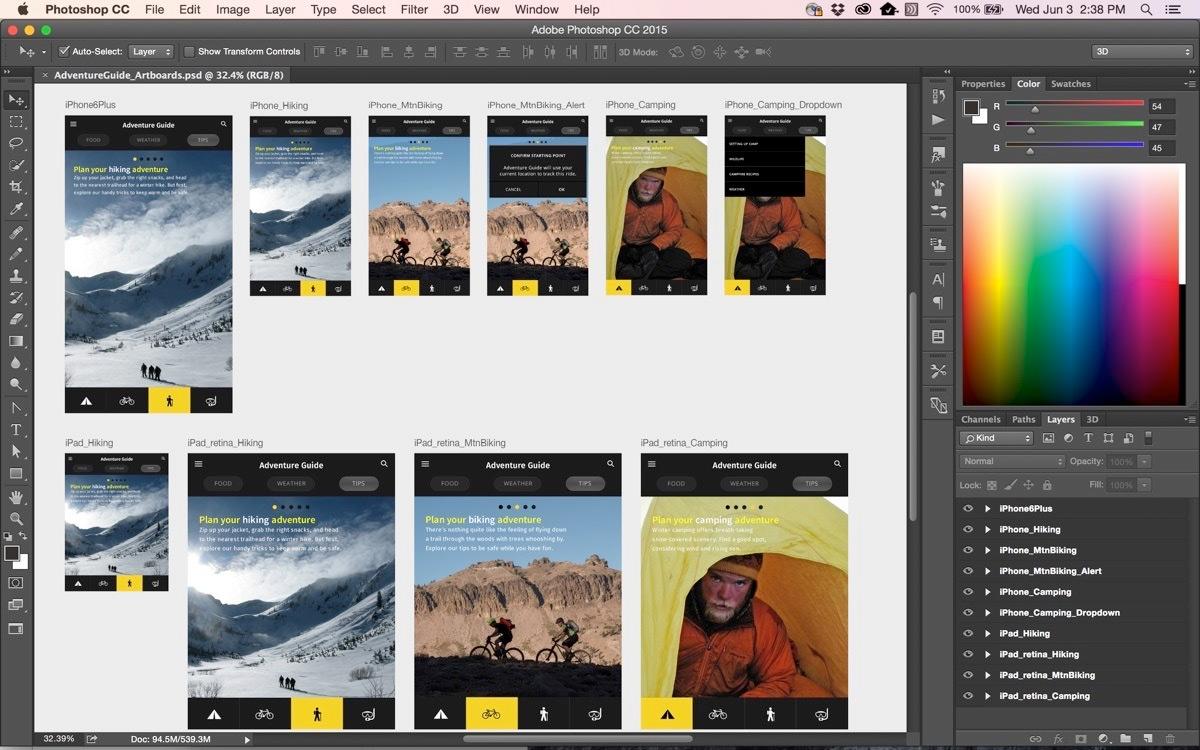 Moving to a subscription-based plan of cloud-run apps allows Adobe to push regular updates, and the company is keen on at least one major update a year for the entire suite. In the 2015 installment, Adobe improved performance with speeds up to 10 times faster than CS6 in some apps. Besides that welcome tweak, the company also announced its own stock photography service: Adobe Stock. As you might expect, Stock is integrated with Creative Cloud apps so you can nab those images easily and CC subscriptions will save you 40 percent on photo purchases. You'll be able to search the Stock library from within apps like Photoshop before placing selections in a mockup. And yes, there is an additional fee required. You'll pay $10 per image or $30 a month for a collection of 10 ($50 if you're not a Creative Cloud user). Creative Cloud Libraries have been around for a while, allowing multiple people to grab assets to a project without having to send an email or shout across the office. Now, technology Adobe calls CreativeSync will carry files, fonts, settings and other items across devices so that you can pick up right where you left off -- even if you switch from a desktop to a tablet or vice versa.

Those Creative Cloud Libraries are getting an update, too. When a colleague updates an asset that you're using in another file, they'll have the option of updating it in all of the files where it's used. That means any Photoshop, Illustrator or InDesign file will get all the changes automatically without you having to replace or update the file manually. As a designer, I can say that both of these cloud-syncing tools are welcome additions. Oh yeah: Creative Cloud Libraries make the jump to After Effects with this update, so motion graphics and video folks can take advantage there.

If you're familiar with Illustrator, you may know that the app allows you to create multiple artboards in the same file to keep things organized. Well, now you can do the same in Photoshop. So if you're working on a mobile app UI, you can lay out all of the screens side by side rather than having to toggle layers on and off. Speaking of Illustrator, designers have been clamoring for years for Adobe to boost the software's zoom beyond the 6,400 percent. It's now a whopping 64,000 percent (!!!). What's more, Illustrator now has a recovery tool that restores a file if the app crashes before you can save. All you have to do is reopen the app and the document will appear just as it did before the software shut down. There are a ton of other new features available now across 15 Adobe apps, so for the finer points, grab the detailed info right here.

In this article: adobe, adobestock, cc, creativecloud, creativesync, illustrator, indesign, photoshop, stockphotos, update
All products recommended by Engadget are selected by our editorial team, independent of our parent company. Some of our stories include affiliate links. If you buy something through one of these links, we may earn an affiliate commission.