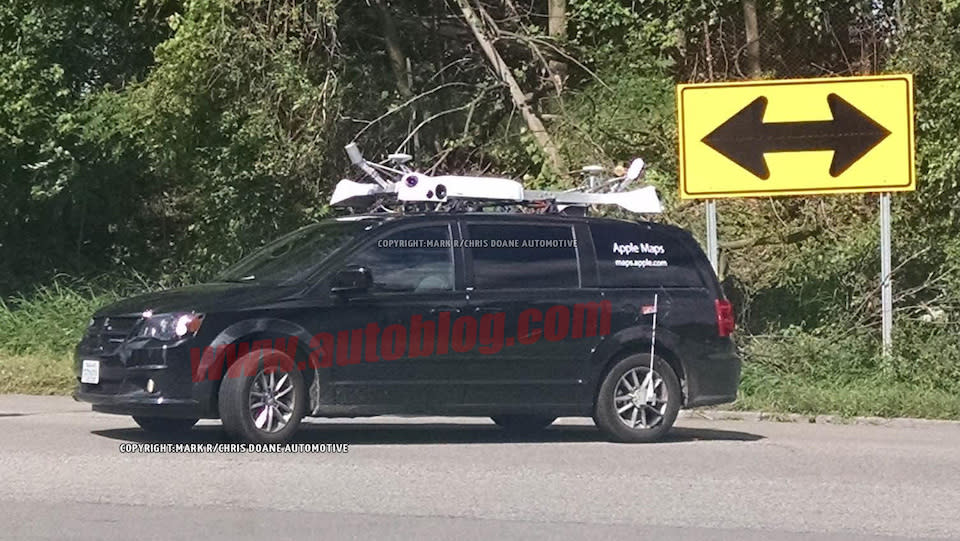 Earlier this year, a few eagle-eyed folks in the East Bay region in Northern California noticed unmarked minivans with what looked like an array of cameras and sensors sitting on top of it. It turns out that the vehicles were registered to Apple, which sparked a bunch of speculation that the Cupertino firm was deploying its own fleet of mapping vehicles to compete with Google Street View. Well, as was revealed earlier this month, that is certainly the case. In a photo captured by our friends over at Autoblog, a Dodge Caravan with the same sort of camera assembly was spotted with a decal that clearly states "Apple Maps" and "maps.apple.com" on the back window. As the company's own information page states that it will "blur faces and license plates on collected images prior to publication," it seems that Apple Maps could very well get its own Street View-esque feature in the future. If you're interested in spotting these vehicles for yourselves, Apple has posted the schedule of where they'll be driving around next.

In this article: apple, applemaps, gear, mapping, TL18APL, transportation
All products recommended by Engadget are selected by our editorial team, independent of our parent company. Some of our stories include affiliate links. If you buy something through one of these links, we may earn an affiliate commission.