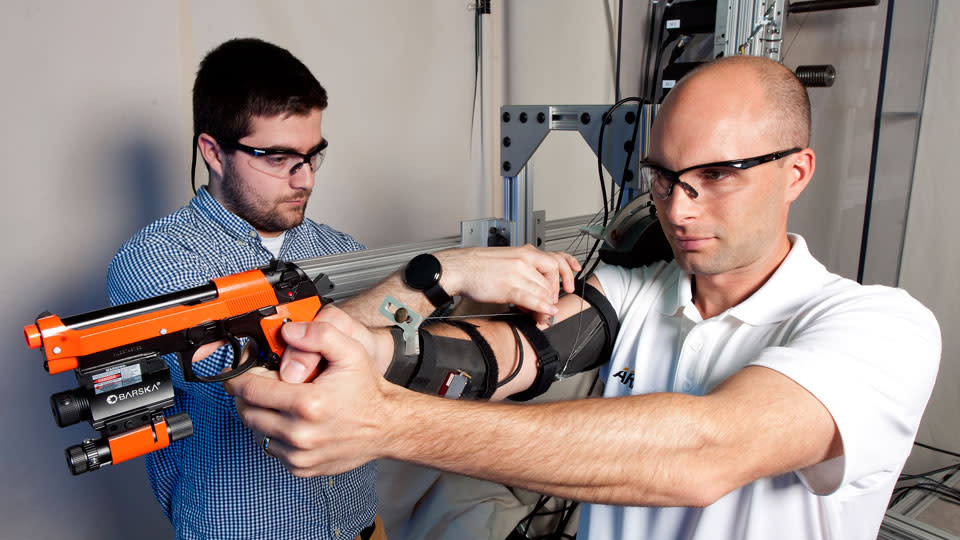 Foot soldiers thrive on their shooting skills, but learning expert marksmanship can take a long, long time. US Army researchers could soon have a robotic shortcut to improving those skills, however. They're working on MAXFAS, an arm exoskeleton that uses cable-activated arm braces to correct involuntary arm shakes while you're shooting -- think of it like a stabilized camera. The carbon fiber body is light enough that it doesn't weigh you down, and it's smart enough to detect the differences between purposeful movements (such as aiming) and tremors.

The machinery is currently fixed in place, so it would mostly be useful in the short term as a way to teach proficiency to recruits and anyone who needs brushing up. In early tests, the developers noticed that people who'd worn MAXFAS were better shots even after taking it off. Eventually, though, there could be a truly mobile version that gives troops a boost in the field. You could one day see armies full of crack shots that aren't easily thrown off by fatigue or the chaos of war.

In this article: army, exoskeleton, maxfas, robotics, soldiers, usarmy, wargadget, wearable
All products recommended by Engadget are selected by our editorial team, independent of our parent company. Some of our stories include affiliate links. If you buy something through one of these links, we may earn an affiliate commission.