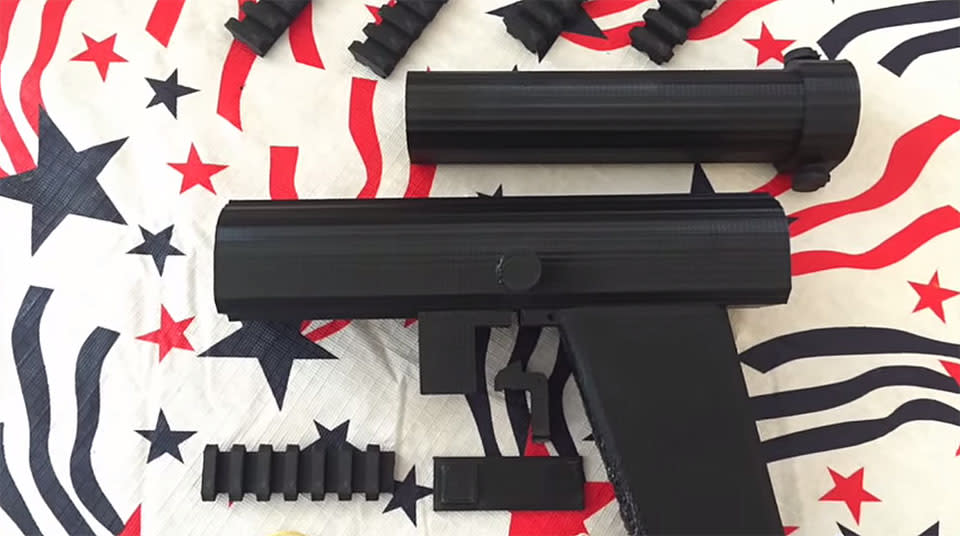 In the wake of recent shootings, many Americans think the US needs at least slightly stricter gun laws. However, when it comes to 3D-printed weapons, one maker begs to differ. Peter Alaric built a 3D-printed dart gun to make a point about proposed State Department laws banning weapon blueprints on the internet. Calling President Obama "our Fuehrer," he said "this gesture of protest further proves the obvious futility of attempting to regulate speech and ban simple mechanical objects." His creation fires 40mm blowgun darts via a piston and rubber bands, and can even hold accessories like laser sights.

He claims that thanks to an air-gun exemption, his weapon is legal, though it's hardly as dangerous as a real 3D-printed gun (especially to the user). Nevertheless, it could still be lethal, so it seems that Alaric's point is that the rules will arbitrarily ban certain weapon designs and not others. He believes that gun designs are a form of speech protected by the constitution, a similar argument made by infamous 3D pistol creator Cody Wilson. However, opponents of weapon blueprints believe they're "functional things," not speech, and therefore subject to regulation.

As it happens, US judges and lawmakers could soon decide who's right. The State Department recently said that it plans to require prior approval for internet publication of any "technical data" that could help someone build a weapon, 3D-printed or otherwise. It said that such documents constitute, in effect, the illegal export of weapons, and not free speech. Because of that stance, Wilson's company Defense Distributed recently filed a lawsuit against the State Department. The judge's decision in that case could give us the constitutional status of 3D-printed weapon designs, once and for all.

In this article: 3d Printer, 3D Printing, dart gun, defense distributed, Guns, Peter Alaric, video, weapons
All products recommended by Engadget are selected by our editorial team, independent of our parent company. Some of our stories include affiliate links. If you buy something through one of these links, we may earn an affiliate commission.