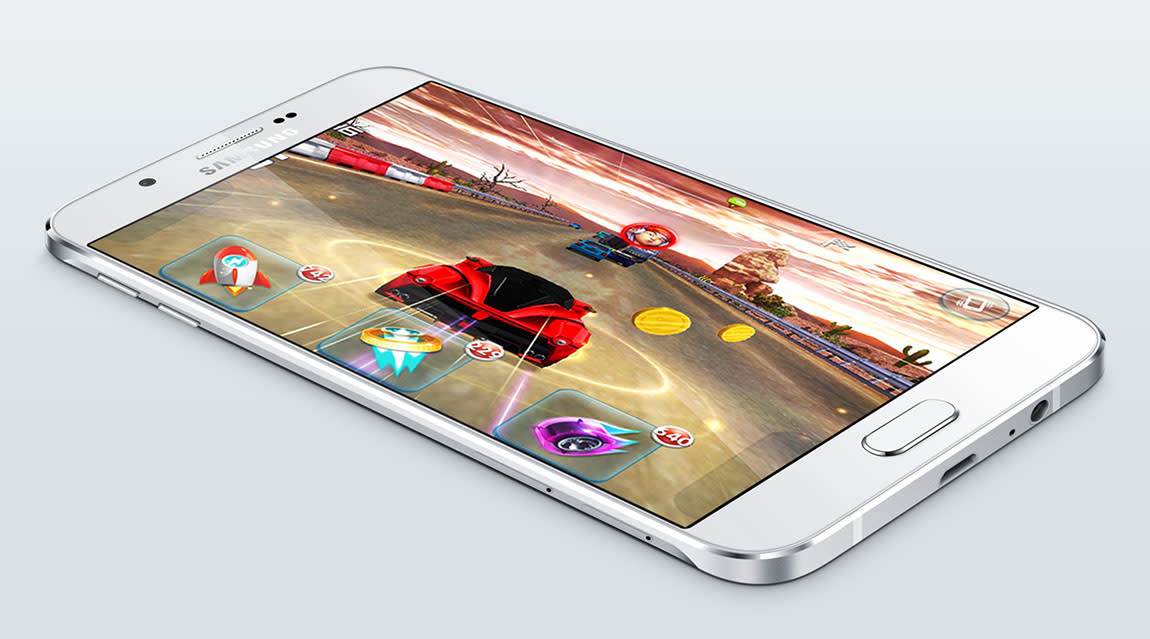 Samsung has quietly launched its slimmest smartphone ever in China. The Galaxy A8 isn't a spec-monster, but it's certainly a design feat for a company that gets criticized a lot on that front. The all-metal body is just 5.9mm thin, weighs a mere 151 grams (5.3 oz) and has a bezel size that you can basically round down to zero. The internals are still good enough to fight any mid-range device: a 5.7-inch 1080p OLED display, 8-core Snapdragon 615 chip, a 16-megapixel f/2.2 rear/5-megapixel wide-angle f/1.9 front camera and 2GB of RAM. Despite the size, Samsung managed to squeeze in a generous 3,050mAh battery that's larger than the Galaxy S6's.

Samsung has also thrown in other tech like a fingerprint sensor and hand-wave detection that activates a photo timer. It's obviously betting that Asian buyers looking at a similar mid-range phone (like the HTC Desire 826) will go for the Galaxy A8 instead based on its premium metal body and extra features. And that brings us to the price -- it's rumored to start at 3,499 yuan (about $560), a price that's on the high-end for that class of device. There's no news on US or European availability, but we'd guess it'll come over here -- and even if it doesn't, you may see similar design language in the incoming Galaxy Note 5.

In this article: fingerprint, Galaxy A8, mobilepostcross, octacore, samsung, smartphone, thinnest
All products recommended by Engadget are selected by our editorial team, independent of our parent company. Some of our stories include affiliate links. If you buy something through one of these links, we may earn an affiliate commission.