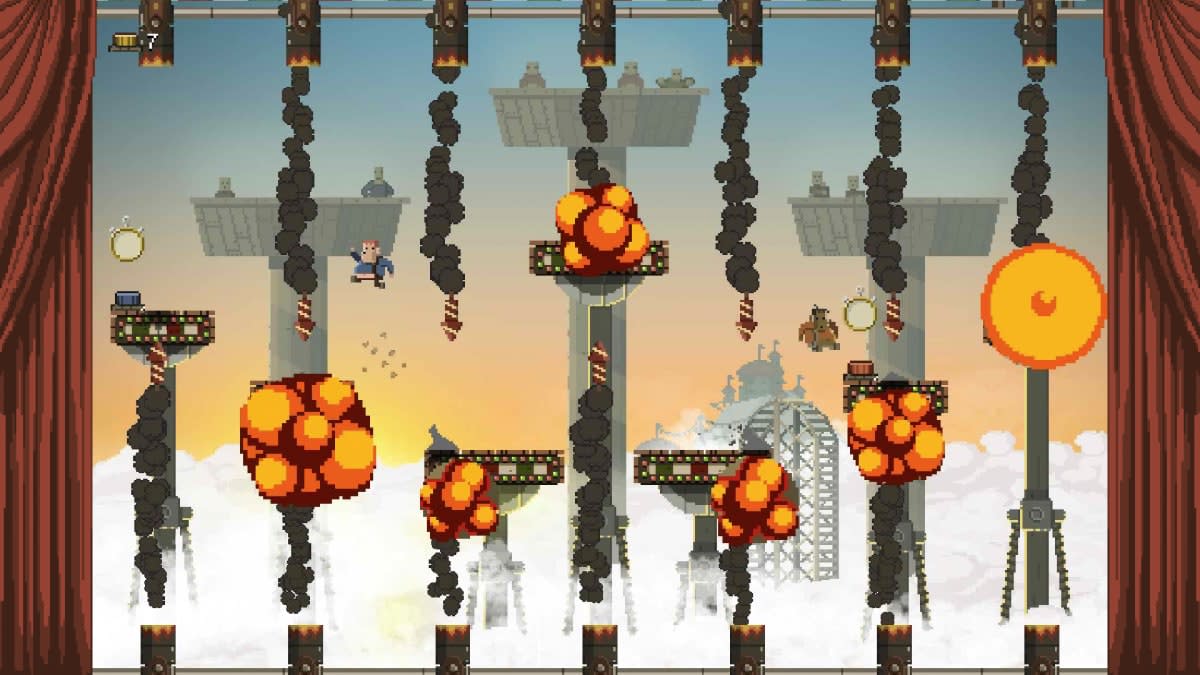 Humans make for more complex strategy than code can. Take Penarium designer and producer Rick van Ginkel's story for example: His studio, Self Made Miracle, once tried to develop a strategy game that relied on complicated spreadsheets and algorithms. It "failed horribly," he says. "I was doing spreadsheet balancing all the time and couldn't get it right. That is why we decided to go for an action game where I could do game design based more on 'feeling' rather than mathematics." That new, feeling-based game is Penarium, a twitchy, bloody, pixelated romp about a man attempting to survive a violent circus attraction in the late 19th century. Instead of forcing strategy into the code or controls, Penarium puts the complexity in players' hands.

Penarium requires a mix of timing, luck and that sudden, instinctual urge that prompts players to jump in a certain direction at a specific time. It's a gut-feeling kind of game. Penarium has just two basic controls -- run and jump -- and it throws all manner of explosives, rotating blades, spiked walls, fiery beams, giant metal balls and other lethal obstacles at Willy, the silly protagonist. It's basically assured that Willy will die in Penarium. In fact, that's part of the fun. But, with each life lost, players learn more efficient ways of surviving each level.

In that way, it's almost like Super Meat Boy, though van Ginkel and fellow designer Teun Westenenk say they don't consider that game among Penarium's influences. "Super Meat Boy gets brought up a lot (and I understand why) but was never really a game we looked to a lot during development," van Ginkel says. "We did take a good look at the original arcade version of Super Mario Brothers as well as Super Smash Bros and Super Crate Box. Perhaps we should have called our game Super Penarium as well to fit in nicely."

Penarium differs from Super Meat Boy in another major way: It features local multiplayer alongside the solo campaign modes. This applies to all versions of the game (PlayStation 4, Xbox One and PC via Steam).

During development, van Ginkel and Westenenk received help from other independent studios in the Dutch Game Garden, a federally funded game-making incubator in the Netherlands that's spawned successes such as Vlambeer's Ridiculous Fishing and Nuclear Throne, Abbey Games' Renowned Explorers, and Ronimo's Awesomenauts. The Dutch Game Garden encourages developers to work together and support each other, and it provides a staff dedicated to helping out individual projects. This team helped Self Made Miracle negotiate a publishing contract with Worms studio Team17.

"The Dutch Game Garden helped us grow as a company really fast," Westenenk says. "Before we moved into the DGG, we knew how to make games, but we had no network whatsoever and didn't know how to do things like marketing and business. This is where a place like the DGG is perfect."

Now, after two years of work and contracts, Penarium is due to hit PS4, Xbox One and PC this week. Oddly enough, though, it started out as a Mac game.

"We actually made the original version of the game for Mac," van Ginkel says. "We are all used to working on Macs ourselves, so we started building it for that and than ported it over to Windows. We had to buy Windows machines as we didn't have any in the office."

Westenenk and van Ginkel are nervous, yet hopeful, about Penarium's launch this week -- September 22nd on Steam and PS4, and September 23rd on Xbox One. In the end, they hope players learn that simple controls can make for a surprisingly complex, entertaining game.

But, even if Penarium doesn't convince players of the merits of simple controls, Westenenk hopes the game's true moral comes across: "Never, ever go to a circus."

So yeah.. the game we have been working on for almost 2 years is coming out tomorrow.. that's not scary at all..

In this article: circus, dutchgamegarden, hdpostcross, Indie, interview, penarium, selfmademiracle, SuperMeatBoy, Team17
All products recommended by Engadget are selected by our editorial team, independent of our parent company. Some of our stories include affiliate links. If you buy something through one of these links, we may earn an affiliate commission.